Jamie Dimon is optimistic on the U.S. economy in the near future, and the JPMorgan Chase chairman and CEO is urging corporate leaders to play a more active role in shaping public policy.

In his annual letter to shareholders, Dimon gave a thumbs-up to the circumstances shaping the socioeconomic environment.

“I have little doubt that with excess savings, new stimulus savings, huge deficit spending, more QE, a new potential infrastructure bill, a successful vaccine, and euphoria around the end of the pandemic, the U.S. economy will likely boom,” Dimon said.

“This boom could easily run into 2023 because all the spending could extend well into 2023.” 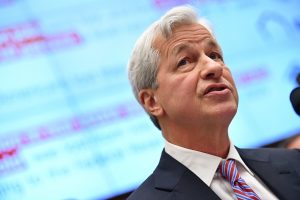 But Dimon also warned that any boom cannot be sustained without significant discipline from the federal government.

“The permanent effect of this boom will be fully known only when we see the quality, effectiveness, and sustainability of the infrastructure and other government investments,” he said.

On The Evolution Of Financial Services: Dimon warned “banks are playing an increasingly smaller role in the financial system,” which he blamed on a combination of factors including onerous regulations and rising competition from nonbank lenders, fintechs, and retail and technology companies that are permeating the financial services sector with banking products.

The competition does not carry the same regulatory compliance requirements that banks face, Dimon said, adding that this could result in new risks that are not being addressed by regulators.

As for his institution, Dimon said he is still focused on building a new headquarters in New York that will accommodate 12,000 to 14,000 employees, and he dropped a not-subtle clue that he has a shopping list and is ready to go buying.

“We have mentioned that our highest and best use of capital is to expand our businesses, and we would prefer to make great acquisitions instead of buying back stock,” he said.

“Acquisitions are in our future, and fintech is an area where some of that cash could be put to work — this could include payments, asset management, data, and relevant products and services.”

On The Private Sector And Politics: Dimon acknowledged that the U.S. came out of 2020 battered and bruised from acute challenges ranging from the COVID-19 pandemic and the economic tumult it created, the unrest after the death of George Floyd in Minneapolis police custody, and the divisive presidential election.

As a result of these issues, Dimon said the public mood has turned sour and distrustful.

“Many Americans have lost faith in their government’s ability to solve these and other problems — in fact, most people would describe government as ineffective, bureaucratic, and often biased,” he said

“Almost all institutions — governments, schools, media, and businesses — have lost credibility in the eyes of the public. And perhaps for good reason: Many of our problems have been around for a long time and are not aging well. Politics is increasingly divisive, and government is increasingly dysfunctional, leading to a number of policies that simply don’t work.”

Although Dimon said “people are right to be angry and feel let down,” he warned against anti-government sentiment.

“Our failures fuel the populism on both the political left and right,” he said. “But populism is not policy, and we cannot let it drive another round of poor planning and bad leadership that will simply make our country’s situation worse.”

Dimon called on his fellow corporate leaders in becoming more vocal in addressing social and political issues, insisting that executives “should not be buttonholed by the debate about whether there are ‘fiduciary’ reasons to think of ‘shareholder value’ narrowly and to the exclusion of those who work at the company, our clients, and communities.”

He also insisted the private sector could play a role in solving the problems bedeviling government leaders.

“We are fully engaged in trying to solve some of the world’s biggest issues — climate change, poverty, economic development, and racial inequality — and the accompanying features that follow describe the extensive efforts we are making. With well-designed policies, we think these problems can all be solved.”

Benzinga does not provide investment advice. All rights reserved.