Ukrainian Jews, Under Putin’s Bombs, Seethe at His Attempt to Smear Ukraine as Neo-Nazi 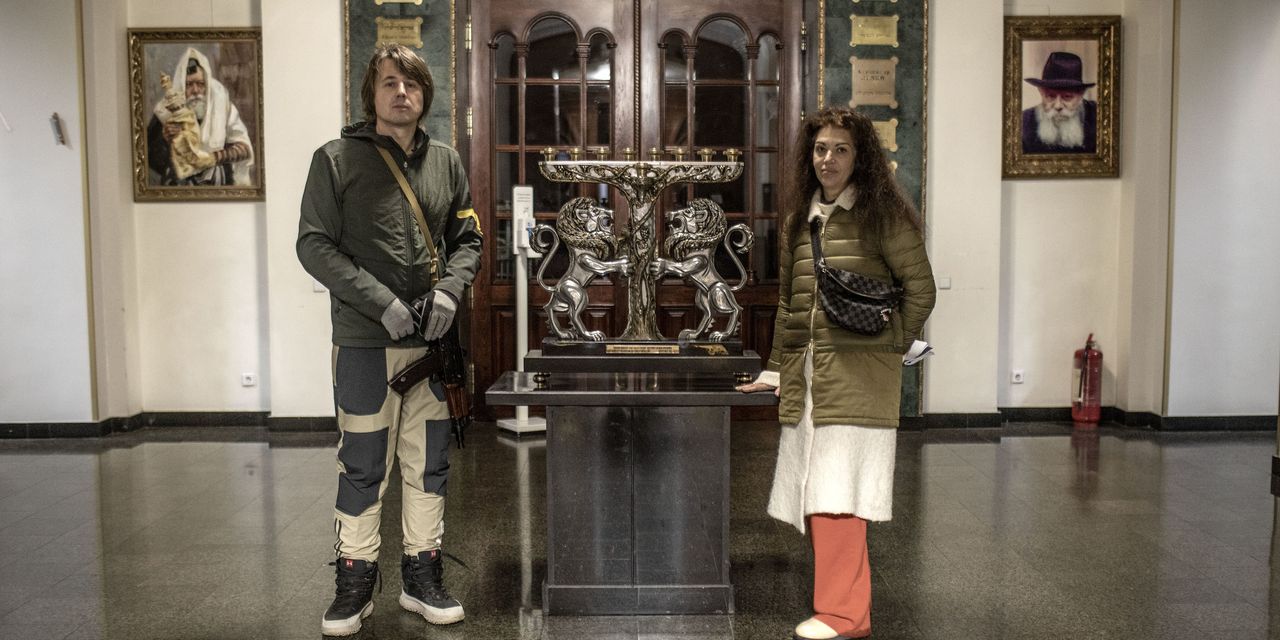 KYIV, Ukraine—Hours after a Russian missile Tuesday struck the TV tower in Kyiv’s Babyn Yar area, the site of one of the worst massacres during the Holocaust, Vitali Senchenko phoned his cousin in Israel, trying to get his family out of the city.

“The Babyn Yar attack was the last straw,” Mr. Senchenko, a cyber defense expert, said Wednesday in the basement of a synagogue in Kyiv’s Podil area as he prepared to part with his wife Kateryna and their two children, aged two years old and one month. They were to leave on an evacuation convoy organized by the Jewish community.

Mr. Senchenko said he is remaining in Kyiv to apply his skills helping the city’s defense. “He is staying so that we could come back,” Kateryna said.

Down the corridor, Galina Naletnikova—who also decided to leave her home after the strike—was trying to make sense of her upended life. Ms. Naletnikova, 70, moved to Kyiv from Moscow 40 years ago, joining her late husband who had lost much of his extended family in the Holocaust.

“It’s so absurd, so hard to believe in. All these sirens, all these explosions,” she said. Ms. Naletnikova, a philosophy professor, said she didn’t know where she would be taken, and when she would return.

Her son has chosen to stay, to defend the city as part of the new Territorial Defense units. “I’ve told him to come visit my apartment once in a while because I’ve had to leave my cats behind,” she said, attempting a smile.

has justified his war on Ukraine by the need to “de-Nazify” its government, falsely claiming that Kyiv is controlled by a cabal of American-sponsored neo-Nazis. To Ukrainian Jews, and many Jewish leaders world-wide, it is a brazen insult to the memory of the Holocaust, especially now that Moscow is indiscriminately shelling Ukrainian cities.

“War crimes are happening here,” said one of Ukraine’s leading rabbis, Moshe Reuven Asman, in an emotional video recorded after Tuesday’s strike, holding a Torah scroll in his hands. “The Russian army that was beating the Nazis in 1941 is bombing civilians in Kyiv, Kharkiv and Odessa today. If I die, those who are silent today will be cursed as accomplices.”

A native of Mr. Putin’s hometown Leningrad, now known as St. Petersburg, Rabbi Asman said he is staying in Kyiv to serve his community. “It’s my honor to be on the side of light, not on the side of those who kill.”

In September 1941, over the course of less than two days, some 36,000 Kyiv Jews were marched by the Nazis to the edge of the Babyn Yar ravine, stripped of their clothes and gunned down. Executions on the site continued until 1943.

Today, Ukraine is one of the few European nations with a large and vibrant Jewish community. Despite its dark 20th century history, few signs of open anti-Semitism remain today. Though there are neo-Nazi groups and political movements in Ukraine, they have much smaller support than in most European nations and don’t poll nearly enough to be represented in parliament. Ukraine’s President

elected with 73% of the national vote in 2019, is Jewish, his grandfather a Soviet World War II veteran. A Jewish prime minister headed the Ukrainian government before the election.

“My children are running around all over Podil wearing kippahs on their heads, and we have never experienced any prejudice,” said Ilana, a representative of the ultra-Orthodox Chabad movement who helps run the relief effort at the Podil synagogue, and who didn’t want her surname used.

A native of Ukraine, she returned to Kyiv after 10 years in Israel, and she isn’t evacuating. “We are staying here because we are needed here,” she said as she calmed her daughter after yet another air raid siren. “We also know it will be over soon because we know that our Ukraine will win, and support from above is giving us strength.”

The strike on the TV tower in Babyn Yar, which killed five passersby and injured five others, caused particular outrage in Ukraine and abroad.

“Putin seeking to distort and manipulate the Holocaust to justify an illegal invasion of a sovereign democratic country is utterly abhorrent,” said Natan Sharansky, the advisory board chairman of the Babyn Yar Holocaust Memorial Center. A one-time Soviet political prisoner, Mr. Sharansky served as Israel’s deputy prime minister and headed the Jewish Agency, the quasi-government body coordinating immigration to Israel and relations with the Jewish diaspora.

A day after the strike on Babyn Yar, Kyiv synagogues organized evacuation convoys for Kyiv’s Jews and their relatives to Poland, Hungary, Moldova and western Ukraine.

Uri, a native of Ukraine who preferred his surname not to be used, was supposed to fly from Kyiv to his home in the Israeli town of Kiryat Gat near the Gaza Strip, on Feb. 24, the day the war began. “Thanks God the flight was canceled, otherwise I would have been stuck in Israel while my wife remained here by herself ,” he said.

Uri spent several days in bomb shelters in Kiryat Gat last year, when Israel came under rocket attacks by Islamist movement Hamas from the Gaza Strip. “You can’t compare the two,” he mused. “The bombings here now, it’s as if wild dogs have broken off their leash.”

At the Brodsky synagogue across town, a Ukrainian parliament member, Oleh Voronko, took a rest with his wife after helping secure the departing evacuation convoy. He wore the yellow arm band of the city’s defenders and held a Kalashnikov assault rifle. “It’s a real war here, a war to exterminate the people of Ukraine,” he said. While Mr. Voronko is not Jewish, his wife, Albina Feerman, is.

“I spend every night in the shelter, and on day seven of the war it turned out that every third person in my shelter is Jewish,” she said. Originally from Rostov, Russia, Ms. Feerman, a medical doctor, said she had never imagined she would be spending her nights hiding from Russian bombs. “Not in my worst nightmare,” she said.

Ms. Feerman said she tried to share her experiences on social media with her friends and family in Russia, many of whom watch Russian television and believe Mr. Putin’s narrative about Ukraine being in the thrall of Nazis. Out of 20 classmates in her social-media group, only two have written her back, in a private message invisible to others, to ask about her well-being.

“The remaining eighteen are silent,” she said. “They just keep posting pictures of puppies and cats.”