Ukraine Is a World Leader in Surrogacy, but Babies Are Now Stranded in a War Zone 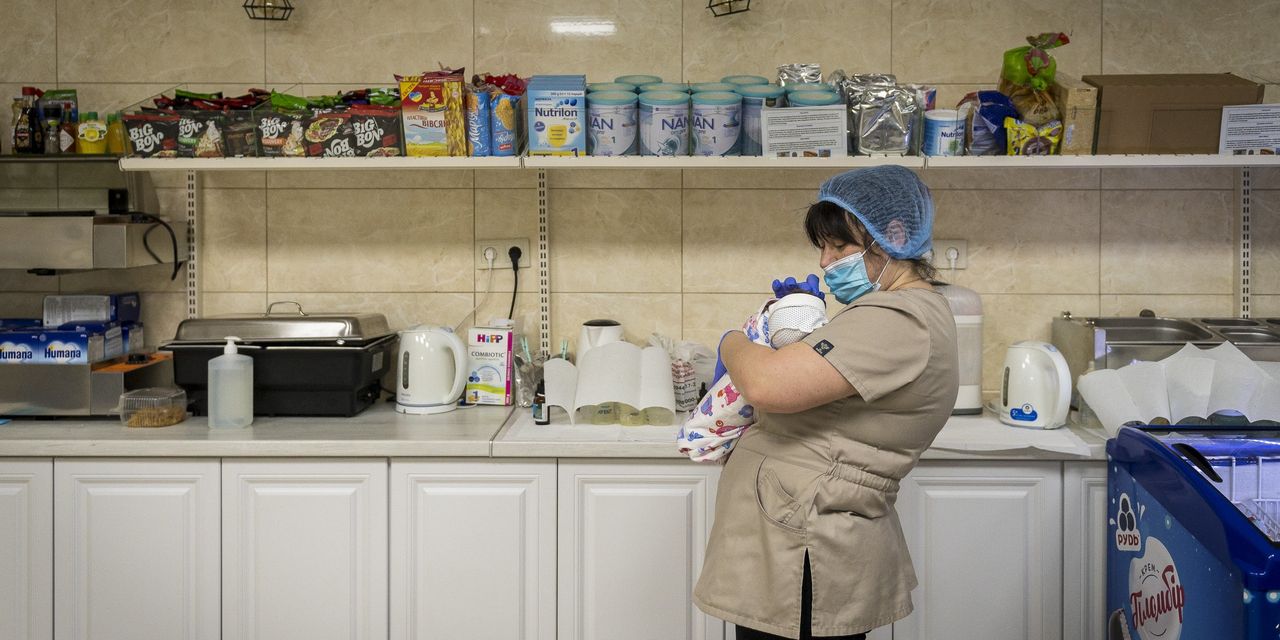 In the basement beneath one apartment block in Kyiv, 19 newborns lie in plastic cots, their cries mingling with the blare of air-raid sirens warning of incoming Russian strikes.

The war in Ukraine has prevented their biological parents, in Canada, Germany, France and elsewhere from claiming babies born via the country’s many surrogate mothers.

“The number is growing every day,” said Denys Herman, legal adviser to Ukraine’s largest surrogacy agency, BioTexCom. It works with 600 surrogate mothers, some of whom gave birth to the babies being kept there. They are currently in the care of Ukrainian nannies.

As Russia ramps up a violent push to take strategic cities, the fate of hundreds of surrogate mothers carrying babies, and newborns, across the country is becoming increasingly perilous. Hundreds of expectant parents are struggling to reach them.

“I don’t know how I’m going to get my son out,” said American Eileen Cornell, who had planned to travel from New York to Kyiv for the birth of her son this month.

Her Ukrainian surrogate, Anna, was in the capital preparing to deliver the baby when Russia invaded more than two weeks ago. “I really do not want to give birth to a child where there is a war,” said Anna, via a messaging app.

Some surrogacy agencies in Ukraine have been scrambling to relocate surrogate mothers to safety since Russian tanks started rolling across the border.

Natural disasters, geopolitical upheaval and most recently the pandemic, have jolted the surrogacy market in Ukraine and other countries over the years. But Russia’s invasion has thrown up some of the most difficult challenges yet. In cities under fire, few places are safe; a maternity ward in the besieged city of Mariupol was hit Wednesday by a Russian airstrike, with many casualties, according to Ukrainian authorities. Maternity wards in Kyiv have moved down to basements for greater protection.

Australian nonprofit Growing Families, which is helping foreign couples navigate the crisis, said it contacted private security contractors to see if they could help extract surrogate babies from Ukraine.

“I am overwhelmed with requests from around the world for babies or surrogates to be evacuated,” said Sam Everingham, founder of the group. He estimated about 800 couples world-wide were expecting a child from a surrogate mother in Ukraine.

Surrogacy is big business in the country. While commercial surrogacy is legal in the U.S., Ukraine is a more affordable option for many couples looking for surrogate mothers. The process costs $43,000 in Ukraine, compared with $130,000 in the U.S., according to a 2020 study conducted by Australia’s Monash University. That has helped turn Ukraine into the second-most popular international surrogacy destination after the U.S., according to the study.

In normal circumstances, both parents must travel to Ukraine to claim their baby. That now means venturing into a war zone when commercial flights have been suspended and governments around the world have advised their citizens to leave Ukraine.

While refugees spill out of the country, some foreign couples have joined the stream of people crossing the border into Ukraine along with journalists and volunteers taking up arms against Russia.

In the early chaos of conflict, some surrogate mothers lost contact with their agencies and were reduced to searching for the biological parents on social media. Others may be stuck in cities under Russian bombardment, said Sergii Antonov, a Kyiv-based lawyer specializing in the medical and reproductive field.

Mr. Antonov, who is part of a small team trying to track down and assist them, said: “We do not know where these unfortunate women are.”

“Everywhere is chaos,” he said.

Some surrogate mothers are reluctant to leave Ukraine because they don’t want to be separated from male relatives banned from leaving the country because of the war. “We can’t force them obviously,” said Julia Osiyevska, the head of the surrogate agency New Life.

Ms. Osiyevska recently decided to evacuate Anna and other surrogate mothers working for her agency, to the neighboring country of Moldova. It is a journey that usually takes less than four hours but took 19 on roads gridlocked with vehicles fleeing west. Photographs Ms. Osiyevska sent from the border showed hundreds of people huddled together against the cold, waiting to cross.

“It is just surreal,” said Ms. Osiyevska. “You can’t stop deliveries. You can’t delay or cancel a birth.”

Surrogacy is illegal in Moldova and Ms. Osiyevska, who had forgotten important documents in the clinic in Kyiv, returned to Ukraine with Anna. With the money she earned from bearing someone else’s child, Anna had hoped to provide a better future for her own daughters, a future Russia’s invasion has now rendered uncertain.

Ms. Cornell, who has remained in contact with Anna throughout, said: “She’s the hero in all of this.”

Days before the invasion, the Delivering Dreams surrogacy agency said it relocated all its surrogate mothers to safety in the western city of Lviv, except one for whom the journey was considered too risky.

“The doctors were extremely worried that the pregnancy would not survive a long and stressful trip,” said agency founder Susan Kersch-Kibler. Now, that surrogate mother is trapped in a maternity ward in a city in Russia’s crosshairs.

How should international authorities handle surrogate mothers and children trying to flee Ukraine? Join the conversation below.

When troops first began massing on Ukraine’s borders at the end of last year, an Australian couple, Jessica Van Nooten, 39 and Kevin Middleton, 40, said they deliberately tuned out the drumbeat of war. It wasn’t a topic of conversation in Ms. Van Nooten’s monthly Zoom calls with the surrogate mother carrying her baby.

“I tried to live in a bit of a bubble,” she said, adding that the couple had tried IVF for four years in vain before being matched with a surrogate in the port city of Odessa in southern Ukraine. The couple was forced to try to get into Ukraine in late February when their daughter, Alba Middleton, was born prematurely at 29 weeks.

“We dropped everything and just said ‘we’ve got to get to Ukraine’,” said Ms. Van Nooten. By the time they had checked in for a flight to Odessa, however, Australia’s Ministry of Foreign Affairs informed them that all flights to Ukraine were canceled.

The couple is now in Moldova, within about 30 miles of Odessa, now threatened with an amphibious attack by Russian naval forces in the Black Sea. Ms. Van Nooten occasionally balks at the prospect of entering a war zone, but the “mom instinct” prevails.

She said: “We need to be with our baby girl.”