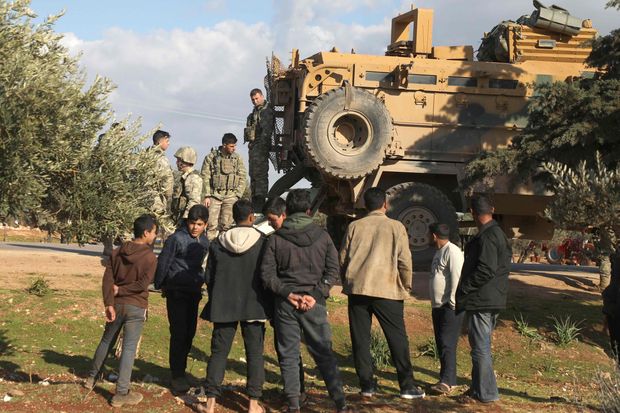 BAB AL-HAWA BORDER CROSSING, Syria—As Turkey launches a military operation against the Syrian government, the U.S. is making a show of support for a NATO ally but stopping short of delivering weapons requested by Ankara.

A group of senior U.S. officials in a visit to Turkey’s border Tuesday announced more than $100 million in new funding for United Nations aid programs providing food, blankets and other support to civilians in Syria.

They also offered words of support for Turkey, whose military has launched a campaign to reverse advances by the Syrian government of Bashar al-Assad that have forced nearly a million people to flee in the past three months.

The visit highlights the fraught dynamic between the U.S. and Turkey, as Washington tries to reassure its military ally as it weighs Ankara’s requests for Patriot missiles and other American weaponry.

“On those hills over there the Turkish military and the Syrian opposition are first of all fighting to prevent a humanitarian catastrophe,” said James Jeffrey, the U.S. special envoy on Syria, while visiting a refugee camp near Turkey’s border with the war-battered country. “Millions and millions of refugees, that’s the intent of Assad and his Russian and Iranian allies.”

The Turkish operation comes as the crisis on its borders is reaching a boiling point. Millions of civilians are trapped in northwestern Syria, penned in by the Russian-backed Syrian government on one side and the Turkish border on the other.

Fearing another massive influx of refugees and further killings of civilians, Turkey is now challenging Russia’s dominance of the airspace. Turkey said Tuesday it downed another Syrian warplane over the country, the third in two days. The sorties risk a broader confrontation with Moscow, which launched a campaign of airstrikes in 2015 that tipped the war in Mr. Assad’s favor.

The American response to the crisis has been complicated by Turkey’s defense links to both the U.S. and Russia.

Turkey has requested the U.S. send Patriot missiles to help it challenge Syrian and Russian air power in northwestern Syria. The U.S. has refused to sell the air-defense system to Turkey since last year, when Ankara bought Russia’s S-400 missile system over American objections.

“We understand the Turkish request for air defense. We are examining that request,” said David Satterfield, the U.S. ambassador to Turkey, during a visit to a Syrian refugee camp near the border.

The officials noted that Turkey had been able to shoot down Syrian regime aircraft even without Patriot missiles.

“We would point out how effective Turkish F-16s have been in sweeping the skies of Syrian fighter aircraft in the last week,” said Mr. Jeffrey.

The U.S. administration’s visit was led by Kelly Craft, the U.S. ambassador to the U.N., who announced a $108 million U.S. donation to U.N. relief programs. Ms. Craft met with Syrian rescue workers and crossed through a border crossing into Syrian territory.

There, she and Mr. Jeffrey posed for photos with members of the rescue organization Syrian Civil Defense, also known as the White Helmets, under a sign reading “Welcome to Syria.”

“The world is watching us as we are slaughtered,” a member of the White Helmets told Ms. Craft in a meeting at the border crossing.

“The only answer is a cease-fire,” Ms. Craft responded. “The humanitarian aid, while that is wonderful, that is just a response to this brutal attack by the Assad regime.”