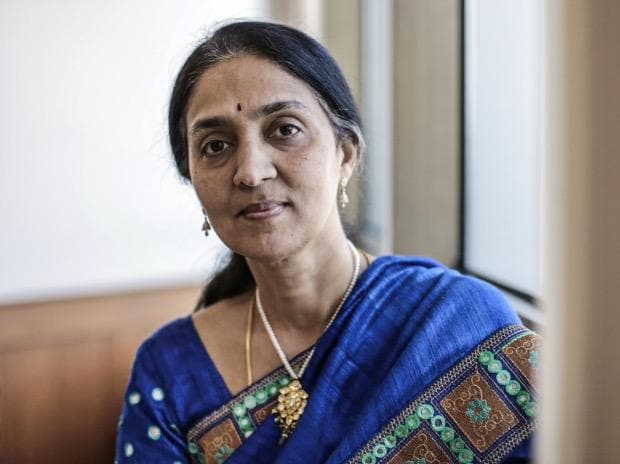 Around the National Stock Exchange of India, Chitra Ramkrishna was practically her own institution. A founding member of the bourse, she helped shape it into the world’s largest derivatives exchange, opening trading to a growing middle class and serving as its first female chief. In 2016, she stepped down to high praise for her “sterling contribution.”


But the reputation of the woman nicknamed “Queen of the Bourse,” along with the multi-billion dollar exchange, took a shocking tumble last month. Indian authorities accused Ramkrishna of crimes ranging from evading taxes to, more bizarrely, leaking confidential information for years to an unnamed spiritual guru living in the mountains.


The strange tale of mysticism-meets-technology reveals what could be a complete breakdown of security and best practices at the nation’s largest bourse. With the overhang of a messy investigation, bankers in India said the new allegations may not just delay the exchange’s much-awaited initial public offering, but also hurt its growing clout in the global equity market.


Over several tumultuous weeks, the authorities arrested Ramkrishna, 59, and Anand Subramanian, her former colleague, who has also been accused of criminal misconduct. Tax authorities searched their homes. This month, Ramkrishna’s successor and the exchange’s current chief executive, Vikram Limaye, said he would step down when his term ends over the summer. The NSE has invited applications through March 25 for a new leader.


“Our credibility is at stake,” Sanjeev Aggarwal, a judge, said this month at a court hearing in New Delhi. “Who will invest in India if scams like this happen?”


The NSE did not respond to requests for comment. In a statement, the exchange said it was cooperating with investigators and had made management changes in recent years. Lawyers for Ramkrishna and Subramanian did not return messages and calls seeking comment.


The pair have denied wrongdoing in court. Ramkrishna told regulators that nothing untoward happened with the guru, likening their conversations to “informal counsel from coaches, mentors or other seniors in this industry.”


The drama intensified in February, when the Securities and Exchange Board of India released a 190-page regulatory order disclosing that Ramkrishna had sent sensitive information to an outsider described as a yogi in the Himalayas.


In an interview for that report, Ramkrishna said the figure guided her hand as chief executive, a role she served in from 2013 to 2016. The yogi was non-corporeal, she said, but corresponded using the email address [email protected], which combines the names of three religious texts. Ramkrishna referred to the guru as “thee,” “swami ji” and “your lordship.”


SEBI alleged that the yogi had turned Ramkrishna into a “puppet,” remotely controlling finances and steering promotions. In 2013, for instance, she hired Subramanian, though, SEBI said, he had no experience in capital markets. He was later promoted to chief operating officer at the advice of the yogi, according to the report. Employees said Subramanian had enormous influence. One Indian news outlet referred to him as a “modern-day Rasputin-like figure.”


The identity of the yogi has become a key pressure point, dividing the country’s authorities and deepening the mystery of what happened behind closed doors.


Among the most touted theories is that Subramanian was actually the yogi and that he had duped Ramkrishna, a conclusion made by Ernst & Young, which was hired by the exchange to investigate. SEBI contested that claim, writing in the 190-page order that there was still “no conclusive evidence” linking Subramanian to the email address.


Using information from that inquiry, Indian officials have also widened another investigation potentially implicating Ramkrishna and Subramanian in facilitating unfair trading access. The incident is known locally as the “co-location scam.”


Many now wonder what regulators, NSE board members and investors did to avert malpractice, and whether issues at the exchange are more systemic than they had previously seemed.


Through a lawyer, Subramanian denied this month that he was the yogi. SEBI did not return requests for comment.


Most Powerful to Most Compromised


The National Stock Exchange was started to root out corruption among Mumbai’s brokers and bankers.


In 1992, Harshad Mehta, a high-profile stockbroker nicknamed “Big Bull,” was charged with funneling $2 billion from banks into equities at the Bombay Stock Exchange, which was founded in 1875 and became India’s premier bourse. When the scandal came to light, India’s markets tanked. Mehta died before the trial finished.


In the early 1990s, Ramkrishna, then a young employee at the Industrial Development Bank of India, was recruited to build a more modern exchange and move trading from an open-outcry ring to an electronic system. With her experience working on a blueprint for India’s capital market regulatory agency, she was selected with four others to create what would become the NSE.


The team worked out of a tiny, leased office in a part of Mumbai known for its defunct textile mills. In 1994, they launched screen-based trading using a satellite, allowing instant access to prices across India.


Ramkrishna’s career soared. In 2013, she took over as chief executive, becoming one of only three women in the world to run a bourse. She cultivated a reputation as a driven, visionary leader. In a 2015 interview with Bloomberg, Ramkrishna cited Mahatma Gandhi, the Indian independence leader, as a role model. One of her goals, she said, was to make stocks accessible to the middle class using an exchange-traded basket of securities known as ETFs.


“I’m sure even he would have bought my ETFs!” she said in the Bloomberg interview, referring to Gandhi.


On her first day as chief executive, she appointed Subramanian, an outsider who had previously worked in middle management at a leasing and repair service company. After just three years, Ramkrishna nearly tripled his salary to more than half a million dollars, according to the SEBI order. The pair used their own elevator. When Subramanian visited the trading floor, an entourage installed separate soap dispensers and hand towels for him in the restroom, the local news outlet Mint reported.


She was also deeply interested in spirituality, making many decisions after consulting astrological charts, according to the book “Absolute Power,” a chronicle of the NSE’s highs and lows written by two investigative journalists.


While in office, regulators suspected that the pair had allowed some brokers to host their servers in the same building as the NSE, providing them with faster access to the trading system. However, Ramkrishna blamed irregularities on “technical glitches,” according to the Economic Times, and has successfully appealed against penalties. Some bankers accused by regulators of helping them continue to work at the bourse, Mint reported.


After Ramkrishna stepped down in 2016, Limaye, a Wall Street veteran and graduate of the Wharton School of the University of Pennsylvania, one of the world’s most prestigious business schools, took over as chief executive. The exchange tried to improve stakeholder relationships and put in place new policies to reduce broker defaults.


The NSE continues to report strong results as the number of investors in Indian markets surges. For January, retail investment reached 287 billion rupees, far exceeding figures from December (112 billion rupees) and November (136 billion rupees), according to the latest available data.


Even so, the new involvement of the tax office and federal police in the investigations could derail progress, bankers in India said. Several foreign investors have pulled out. Exchange data show Citigroup Inc., Goldman Sachs Group Inc. and Norwest Venture Partners sold their entire stakes in the NSE in the year that ends March 31.


Shriram Subramanian, the founder and managing director of InGovern, a firm that advises investors, said it was unclear whether “this was a misdoing of the past and NSE has learned its lessons.”


The bourse needs to be aware, he said, “that all stakeholders and prospective investors will be scrutinizing the company closely.”