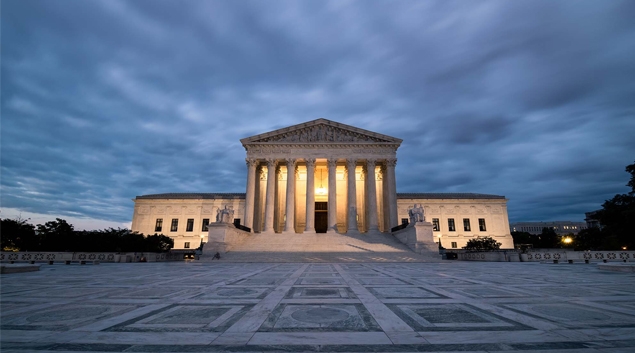 The Supreme Court on Monday paved the way for New York to continue with a COVID-19 vaccine mandate for the state’s healthcare workers, rejecting two emergency requests to block the mandate from doctors, nurses and other care workers.

The 6-3 decision was handed down without an explanation for the order. Justices Clarence Thomas, Neil Gorsuch and Samuel Alito dissented.

The ruling upholds a decision from a lower court to decline hearing the emergency requests. The small group of doctors and nurses who stood opposed to the vaccine mandate had made the argument that it did not include religious exemptions and thus should not be allowed to stand.

In rejecting that appeal and allowing the mandate to continue, the Supreme Court follows what is becoming an established precedent. In early October, according to USA Today, the high court declined to block New York’s COVID-19 vaccine mandate for public school teachers. The court also declined to block Indiana University’s mandate for students, the New York Times reported.

Similar vaccine mandates for healthcare workers have been issued in Maine and Massachusetts. The Supreme Court has declined to block those as well.

While individual states have been permitted by the court to continue with their vaccine mandates, however, opponents of the measures have tasted victory at the federal level, with a federal judge in Louisiana, who was appointed by former President Donald Trump, blocking President Joe Biden’s vaccine mandate for healthcare and nursing home workers in November.

According to CNN, some of New York’s healthcare workers who objected to the vaccines said they were uncomfortable with the shots’ distant connection to fetal cell lines developed from abortions in the 1970s and 1980s. Last December, Pope Francis decreed that receiving the shots was morally permitted.

The Supreme Court ruling further solidifies the precedent that states may make their own decisions regarding whether to mandate COVID-19 vaccines for certain groups. The White House has urged Americans to get vaccinated and to get their booster shots, but early indicators are that the government will stop short of some of the measures imposed in 2020 during the height of the pandemic’s initial wave, when businesses were shuttered and lockdowns imposed.

Nationally, the U.S. has struggled to shake the pandemic, which is currently experiencing yet another surge. The Johns Hopkins coronavirus tracker shows the country’s 28-day case total at almost 2.9 million, bringing the overall total to more than 50 million. In the past 28 days, 33,328 Americans have died of COVID-19 or a combination of the coronavirus and other comorbidities.

Among groups which spoke out in favor of the federal vaccination mandate for private employers with more than 100 employees was the American Hospital Association, which said COVID-19 was commonly spread in workplaces, representing a “severe risk” to public health.

The group highlighted the vaccines’ safety. Studies have shown that serious side effects are very rare, and research has shown that the Pfizer, Moderna, and Johnson & Johnson vaccines are 91.3%, 90% and 72% effective against infection, respectively. While this efficacy wanes over time, early data on Pfizer booster shots show they may increase efficacy to more than 95%.

Numbers culled from the Occupational Safety and Health Administration show that those who are fully vaccinated are contagious for shorter periods than unvaccinated people, and that the unvaccinated pose a much higher risk of transmission.

Not everyone was on board with the mandate. The same week the AMA voiced its support, the states of Missouri, Montana, Arizona and Nebraska led an 11-state coalition in filing a lawsuit against President Joe Biden and his administration to halt the COVID-19 vaccine mandate on private employers with more than 100 employees, calling it “unconstitutional, unlawful, and unwise.”