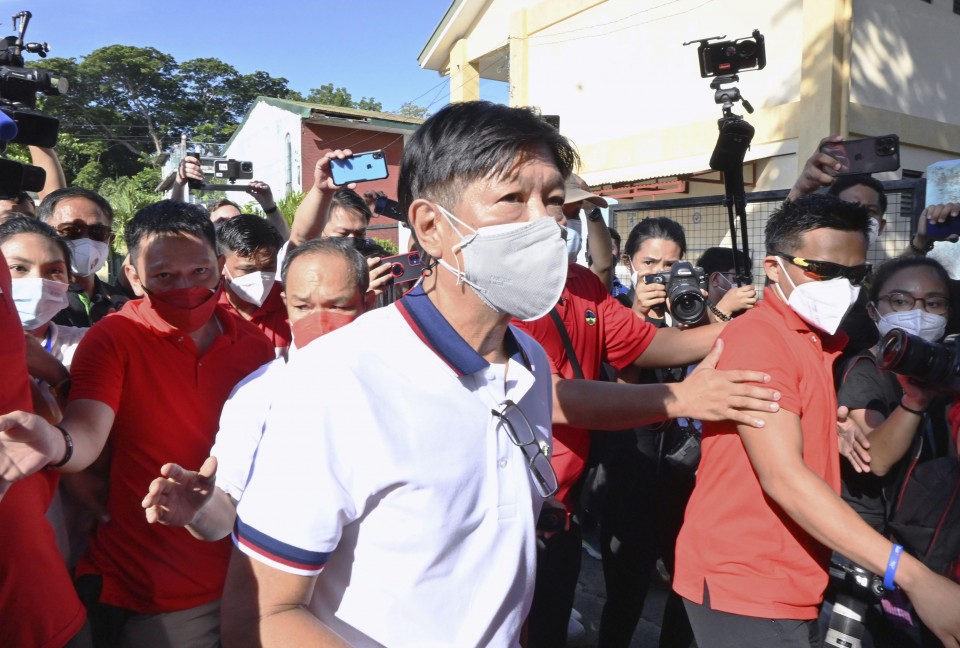 Outgoing President Rodrigo Duterte’s efforts to liberalize foreign ownership of key industries in the Philippines were important as much as a “danger” should the next leader fail to safeguard national security, an economist says in commenting on Duterte’s economic policy.

President-elect Ferdinand Marcos Jr. is likely to continue Duterte’s infrastructure program, foreign borrowing and a friendly approach to China used as a means to pull the economy out of deep recession in 2020 due to the coronavirus pandemic.

It was the worst single-year recession for the Philippines since the dictatorship of Marcos’ father and namesake.

Marcos said he would focus on small- and medium-sized businesses, agriculture and accelerating industrialization just as it was in the 1970s until Marcos senior was overthrown in the 1986 pro-democracy revolution.

Ferdinand Marcos Jr. (C), the son and the namesake of the late Philippine dictator, leaves a polling station in Batac, Ilocos Norte Provinceo on May 9, 2022, after casting his vote. (Kyodo) ==Kyodo

In recent months, Duterte approved laws that would allow full foreign ownership of industries like telecommunications and shipping, and lowered the capital required of foreign retailers in order to attract foreign direct investments.

Foreign participation in the industries was previously limited to 40 percent equity.

“I hope the new administration (will) make use of (the laws’) provisions to prevent valuable assets like telecommunications and shipping from falling into the hands of what might be an adversary country,” Emmanuel de Dios, an economist from the University of the Philippines, said in a recent interview.

The Philippines and China have overlapping claims over the South China Sea. In 2016, the Permanent Court of Arbitration at The Hague invalidated China’s sweeping claim but Duterte’s critics said he failed to insist on the ruling and allowed Beijing’s advances in the mineral-rich marine territory.

De Dios said it was hard for any country to ignore Chinese influence considering the trend of investment trading across the region but Duterte should have kept a more “balanced relationship” with other powers like Japan, Europe, the United States and Australia.

“Giving up, let’s say, an active pursuit of our (territorial) claim, (Duterte) thought he would benefit in terms of massive overseas assistance from China,” he said. “But that did not happen, so it’s a failed experiment.”

In Duterte’s home region in Davao, construction of the Mindanao Railway System has yet to start as the Philippines needed to revise an initial feasibility study, according to a transport official.

The first two phases of the 1,500-kilometer railway are to be funded under China’s Belt and Road Initiative.

“It would have improved transport and created jobs here but it is taking too long and the people are growing impatient,” said Hernanie Catahum, a resident who is supposed to sell his lot to the government to give way to the railway.

Duterte will step down on June 30 after the single six-year-term limit to a president, leaving behind a debt of 12.68 trillion pesos ($241 billion).

Marcos said the Philippines is still in a “relatively good position” even as the debt-to-gross domestic product grew past the 60 percent threshold.

De Dios said Marcos should continue the hard infrastructure projects but at the same time invest in education and health to improve productivity and resilience in case of another health crisis.