Panera is returning to the public markets with a future IPO that will include an investment from a restaurant-themed special-purpose acquisition company (SPAC).

The SPAC, USHG Acquisition (HUGS), announced Tuesday it will be a “cornerstone partner” for an IPO of Panera Brands.

Panera Brands will pursue a traditional IPO that will include HUGS and its Chairman Danny Meyer as key partners. Meyer will become the lead independent director of Panera’s board of directors.

HUGS warrants will become a warrant based on Panera Brands’ common stock. 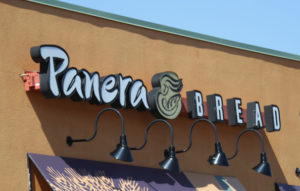 HUGS is a SPAC from Union Square Hospitality Group, one of the largest hospitality groups in New York and the founder of Shake Shack.

The unique structure of the SPAC merger could face regulatory concerns. Bill Ackman’s Pershing Square Tontine Holdings pursued a merger to acquire a stake in Universal Music before ultimately pulling out of the deal due to the SEC’s objections.

The fast-casual Panera Bread is one of several companies owned by Panera Brands, along with Caribou Coffee and Einstein Bros. Bagels.

“Panera Brands meets our investment criteria to combine with a purpose-driven business that is scalable and built for the long-term; a market leader whose greatest strength is its talent and heart; a company where people love to work and with which customers, suppliers, and partners love doing business,” HUGS Chairman Danny Meyer said.

Panera Brands has more than 4,000 locations worldwide, making it one of the largest fast-casual restaurant companies. The company has 2,120 Panera Bread locations in 48 states and Canada. Caribou Coffee has 713 locations in 10 countries. Einstein Bros. Bagels has over 1,000 units in the U.S.

Panera Bread was a publicly-traded company for 25 years before being bought out by JAB Holding in 2017. At that time, Panera had nearly 2,000 cafes and was valued at roughly $7 billion, excluding debt.

JAB, a European firm, is the parent company of many food and beverage brands and is the largest shareholder of Keurig Dr. Pepper.

A focus on omnichannel sales has helped push Panera’s growth. The company counts 45% of its sales from e-commerce.

Panera has also grown its business through its MyPanera loyalty program, which has 45.4 million members.

Meyer has been anxious to grow a fast-casual brand. “We’ve been in the restaurant business for 35 years operating and creating all kinds of different restaurants,” Meyer said in a previous interview.

Benzinga does not provide investment advice. All rights reserved.