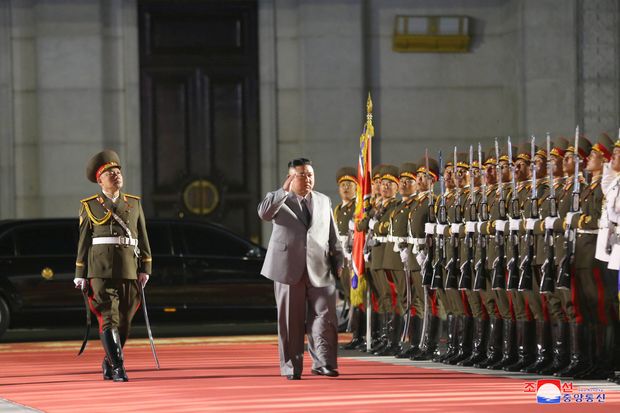 SEOUL—North Korea celebrated 75 years of communism with a military parade at which it unveiled an intercontinental missile that is likely larger than anything else like it on Earth.

The Saturday event, the country’s first military parade in two years, signaled a shift back to the more strident approach Pyongyang long took before softening its stance amid nuclear talks with the Trump administration that are now stalled.

The well-orchestrated ceremony, which included rumbling tanks, goose-stepping soldiers and fireworks, happened overnight and aired on a tape-delayed broadcast on state television. It seemed to flaunt the regime’s confidence in its pandemic response: thousands of unmasked spectators crowded close together.

North Korean leader Kim Jong Un, wearing glasses and a gray suit, entered as fireworks shot off into the pitch-black sky. He strolled to a balcony that overlooked the massive flag-waving crowd packed with soldiers and elites, including his sister, Kim Yo Jong. Tearing up at times during an emotional 25-minute speech, Mr. Kim thanked his military for contending with recent floods and the pandemic, repeating the country’s claim it has zero Covid-19 cases.

“Our war deterrence will never be used as a means for pre-emptive strike. But if,” said Mr. Kim, pausing for a moment before stating, “and if any forces infringes upon the security of our state, I will enlist all our most powerful offensive strength.”

That potential strength was on full display at the Saturday military parade held at Kim Il Sung square in central Pyongyang, an event engineered for both domestic spectacle and outward signaling.

Mr. Kim began the year vowing to introduce a new strategic weapon, while announcing he no longer felt bound by a self-imposed moratorium on long-range tests. But the North has yet to conduct any such launches.

On Saturday, Pyongyang left little doubt over what the new strategic weapon might be, showing off what weapons experts say is likely the largest transportable ICBM ever produced.

The weapon’s predecessor, dubbed the Hwasong-15, was carried on a massive truck with nine axles at a previous military parade, boasting an estimated length of about 70 feet. It had the capacity to potentially carry up to three warheads inside, some missile experts said.

The ICBM unveiled Saturday required a vehicle with 11 axles, suggesting a major upgrade in size. Based on an initial assessment, Pyongyang’s new ICBM may be large enough to carry five or more warheads, said Melissa Hanham, deputy director at the Open Nuclear Network, a research group based in Vienna.

The U.S. relies on systems that can shoot down a single missile launched by an enemy, Ms. Hanham added, so a weapon that can carry multiple warheads poses extra difficulty.

But bigger isn’t necessarily better, given that Pyongyang’s new weapon relies on liquid—rather than solid—fuel. That means the mammoth ICBM must be accompanied by a caravan of vehicles for transportation and fueling before launch, said Scott LaFoy, a satellite-imagery and ballistic-missile analyst based in Washington.

Such weapons “historically are fueled on their launchpad, which means they have hours of exposure to satellites and adversarial intelligence,” Mr. LaFoy said.

The North also rolled out a new weapon designed to be fired from a submarine. This development was important because Pyongyang’s submarine-launched missiles use solid fuel that require far less setup time, so the advancements may be a bridge for using that technology in ICBMs and other land-based weaponry, said Vipin Narang, a North Korea expert at the Massachusetts Institute of Technology.

But parading around new weapons, even the ICBM, is unlikely to be received as a major provocation to the U.S., security experts say.

“A parade is a way to show improvements they made, without being unduly provocative prior to elections” in the U.S., said Markus Garlauskus, a former U.S. intelligence official.

The Trump administration has largely shrugged off more than a dozen North Korean weapons tests since April 2019 because those launches didn’t feature an ICBM or a nuclear test. Mr. Trump, who has met Mr. Kim three times, has frequently pointed to the two leaders’ close relations. But nuclear talks between the U.S. and the North remain gridlocked since last year’s summit in Hanoi that abruptly ended without a deal.

The North last conducted a nuclear test in September 2017, while its most-recent ICBM launch occurred about three months later. U.S. Forces Korea has said the North’s Hwasong-15 ICBM is capable of reaching anywhere in the U.S. mainland. South Korean officials estimated the North’s last nuclear test had an explosive yield five times that of the atomic bomb the U.S. dropped on Nagasaki, Japan, in 1945.

The much-anticipated military parade unfolded with typical North Korean intrigue. Analysts had expected the event would occur midmorning, like many previous parades. But by the afternoon, South Korea’s military said it believed the parade had been held in the early hours of Saturday. North Korea’s state television started its taped broadcast around 7 p.m. local time.

“We clarify that our war deterrent is being developed not for aiming at others,” Mr. Kim said, his voice shaking at times with emotion. “We are developing it in order to defend ourselves.”

The parade was intended to inject some national pride for North Koreans contending with sanctions, flood damage and the pandemic, while to the external audience the flash of military hardware was a face-saving display of national might, said Soo Kim, a North Korean expert at Rand Corp., the policy think tank.

“So long as Pyongyang is able to build and improve upon its nuclear and missile capabilities—and the international community continues to tolerate and accept these as part of the bargain, the regime will maintain the upper hand,” said Ms. Kim, a former Central Intelligence Agency analyst. “Time is on North Korea’s side.”