Coal India officials said the company continues to produce around 2.5 mt of coal daily, but less than 2 mt was dispatched to the power sector in the past 15 days which led stocks to pile up drastically in its pitheads.


While the coal stocks in the Maharatna company peaked to around 60 mt, coal stocks in power plants rose to 41.41 mt – the highest ever inventory level in the country till date.


Officials estimate that another 4 mt-5 mt of stock will be piled up at the pitheads by the end of the month. Before the Covid-19 outbreak in the country, around 4.5 mt of stocks was getting added every month on the average, however, in March 2020, the net stock addition is expected to be around 11-12 mt.


“It is happening because of a cascading effect. Lower industrial activity results in lower demand for power which in turn leads to lower coal demand”, a senior Coal India official said.


In fact, during the first 15 days of this month, when the scare around Covid-19 surfaced, electricity consumption stood at 51 billion units (BU) which is 3.6 per cent lower than the demand in the same period in 2019.


According to data from Central Electricity Authority, the coal stock is enough for plants to produce power for 24 days without any supply from Coal India.


Company sources suggested that power demand, until the first week of March had grown on a year-on-year basis, but it started to decline thereafter.


The official suggested that measures to contain the Covid-19 outbreak, included work from home, implying lower power demand from offices as well as schools, colleges, malls, cinema screens, parks and other public places shutting down temporarily.


“Now with the lockdown in place, demand for power is expected to go down further and hence the demand for coal as well”, the official at Coal India said.


Despite the outbreak, Coal India hasn’t suspended mining operations as it feels production and supply lines of coal needs to be kept open so that power generation remains unaffected and any exigency can be addressed.


“The hurdles faced by the company have reached to an unprecedented level, so much so that the power consumers have stopped making payments”, the CCL official said.


On the other hand, Coal India has suspended calculation of its annual stock measurement from April 1 to April 15 after the Centre and several state governments enforced mandatory travel restrictions. 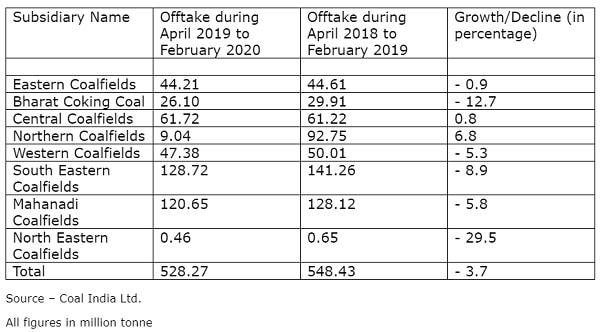