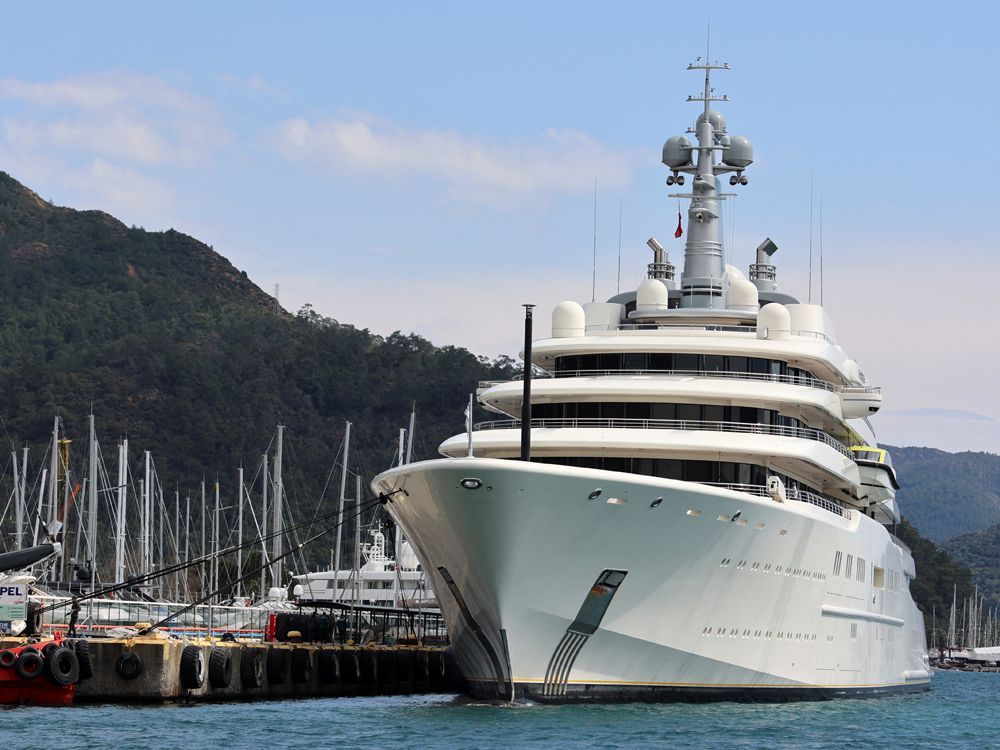 Western nations including Canada have been ratcheting up sanctions aimed at reining in Russian aggression in Ukraine, expanding the list of targeted officials and oligarchs and widening their hunt for assets in recent weeks.

The search has led through offshore jurisdictions such as Cyprus and the British Virgin Islands that have become familiar starting points for schemes to disguise ownership. But it also appears to have spurred Ottawa to accelerate plans to create a publicly accessible registry that would make it easier to track who owns and controls assets in this country, something long sought by transparency advocates who argue Canada’s rules and lax enforcement make it a potential haven for money laundering and tax evasion.

The aim is now to put a system known as a beneficial ownership registry in place by the end of next year — two years earlier than initially planned — to help authorities pierce complex structures to identify the true owners of companies, trusts, and other assets such as real estate.

Under the current system, Canada largely permits private companies to set up without revealing who is behind them, and to operate through related corporate entities with no rules requiring them to disclose that they are acting on someone else’s behalf.

“The thing that this registry is intended to address is the use of corporate vehicles to obscure the ultimate beneficial owner of funds and property,” said Malcolm Aboud, counsel in the litigation group at Osler, Hoskin & Harcourt LLP in Toronto, whose practice involves anti-corruption and sanction compliance. “And that would be whether it’s somebody engaging in money laundering or somebody that is, you know, a billionaire that doesn’t want it known where their assets are.”

In 2019, Canada began compelling most corporations created under the Canada Business Corporations Act to keep a register of individuals with significant control, but there remains “no general requirement to disclose the beneficial owners of private companies,” said Lincoln Caylor, a partner at law firm Bennett Jones LLP.

“Thus, even if a private company is discovered to be engaging in financial crime, it is difficult to discover the individuals behind the company who may ultimately be responsible,” he said.

James Cohen, executive director of Transparency International Canada, said authorities can request information under the current system, “but it is a slow process (and) not as effective … as a publicly accessible registry.”

The creation of such a registry would be a step in the right direction for Canada, said Cohen, who pointed to a recent report by Transparency International found that foreign consultants had been “actively promoting Canada” as a place to set up anonymous offshore companies now that jurisdictions such as U.K. are enhancing their disclosure rules.

The newfound urgency on the part of the federal government comes amid an unprecedented set of sanctions directed at companies and wealthy individuals with ties to Russian President Vladimir Putin.

In addition to moving to freeze the assets of sanctioned individuals, the measures included a “dealings ban” that prohibits any person or company in Canada — and any Canadian operating outside the country — from dealing in property held by or on behalf of a sanctioned person, or facilitating a related transaction. The prohibition extends to providing any financial or related services, or making any goods, wherever situated, available to the sanctioned person or for their benefit.

Jason Kung, a spokesperson for Global Affairs Canada, said any assets owned by sanctioned individuals “are effectively frozen in Canada.” However, he said he was unable to provide further details, including a list of the assets belonging to sanctioned entities or individuals and the value of those assets, citing the Canadian government’s obligations to protect confidential information.

Without a public beneficial ownership registry, those familiar with anti-corruption and sanction compliance say it is challenging to dig deeply into complex ownership structures, even for authorities and big banks.

Complicating matters for those charged with implementing the sanctions is that the prohibitions are broad and potentially far-reaching.

“Without government guidance or court decisions, it can be very difficult for business people to understand their reach,” Sosnow said of the sanctions.

Ownership of real estate in Canada is also difficult to pin down. Property can be held by a private corporate entity, including one outside the country, and there is limited visibility into “the ultimate control persons” due to a lack of disclosure requirements, according to Caylor of Bennett Jones.

Anti-corruption and sanction compliance experts say the most effective registries of beneficial ownership are public and require detailed disclosure of who owns and benefits from assets — even in the most complex corporate structures. They are also armed with stiff penalties for non-compliance, bolstered by vigorous enforcement.

Ottawa has not publicly announced details about its proposed registry, and consultations will likely be used to help shape Canada’s model, with an eye to balancing transparency with protection of privacy for businesses.

Sosnow said he expects Canada’s registry to target all those who hold a beneficial interest in private company, even if they don’t reach the 25 per cent threshold common in corporate registration.

“Presumably this means that a sanctioned person who, say, is a 20 per cent shareholder in a company with four other shareholders … that collectively controls a holding company that in turn owns a company registered under the CBCA (Canada Business Corporations Act), would have to be disclosed,” he said.

The need for such tracking has been thrown into sharp relief by the latest western sanctions, which count among their targets oligarchs who are known to control their holdings through complex corporate structures. Assets can be readily shifted to jurisdictions that don’t require ownership disclosure or are beyond the reach of sanctions. In other cases, registration is delegated to close associates using their names. Recent media reports suggest officials in the European Union and United States are considering extending sanctions to family members of oligarchs and those believed to be helping them shift or conceal assets.

The global nature of the effort to pin down true ownership was spotlighted recently when it was reported in the Financial Times that Antigua and Barbuda had reached out to the United Kingdom to help determine whether a pair of yachts moored near the Caribbean islands are owned by Russian oligarch Roman Abramovich, who is facing sanctions in the U.K. and Canada. On Friday, it was reported that Abramovich had been confirmed as the owner. Antigua is willing to help the U.K. seize the yachts, but has no legal grounds to do so, according to a Reuters report, which said the U.K. would have to seek assistance through an international treaty.

The U.K.’s beneficial ownership registry has been held up as a worthy model for Canada by some who track ownership transparency issues in Canada, such as Caylor and Cohen.

Since 2016, companies there have been required to provide beneficial ownership information to Companies House, the UK’s business registry.

“Following publication in a corporate directory, the public may access the information online without cost,” Caylor said, adding that the widely available nature of the information can bolster tracking and enforcement efforts.

While the U.K. has made strides, it is only part way to its goal of having registries for three kinds of assets: companies, property and trusts.

Cohen said Canada could come closer to the U.K. model if the federal government secures an agreement from the provinces to work with Ottawa to create a “pan-Canadian” registry.

Other global powers including the European Union are moving towards greater transparency when it comes to who owns assets from private corporations to property, but there has been some pushback stemming from privacy concerns.

“Ultimately, there is a privacy interest in personal, financial and business information, which should be balanced against the degree of access necessary or in order to guard against these types of illicit actions,” said Aboud, the Osler’s lawyer.

“There are legitimate reasons for private corporations. And there’s a balance to be struck in terms of how much public information there should be over the private affairs of Canadian owners of corporations.”

Until Canada establishes the new registry, the main responsibility for tracking asset ownership will continue to rest with the country’s banks, which are obligated to conduct extensive Know Your Client, or KYC, screening.

Despite established and sophisticated systems within financial institutions, ensuring accuracy is “very difficult under the current system, because there’s no publicly sourced information available,” Aboud said. “You’re reliant on information that’s provided to you by the counter party, often with no great way to verify it.”

Canada’s current system also makes it difficult to determine the value of assets frozen, or meant to be, under the latest sanctions.

“We know it’s not zero…. Some say it’s billions,” Fen Hampson, a professor of international affairs and Canadian foreign policy at Carleton University, told a senate committee in Ottawa during hearings earlier this month.

The hearings concerned a proposed law that, if passed, would allow seized or frozen property linked to corrupt foreign officials or international human rights abuses to be “repurposed” and directed to organizations helping those harmed or displaced, which Hampson said would work hand-in-hand with more granular ownership data generated by a public ownership registry.

“Canada’s reputation on beneficial ownership transparency and anti-money laundering enforcement has been bad for quite some time,” said Cohen.

“We can learn from other countries like the U.K. and improve on their registry to hopefully go from last place to front of the class.”

Sign up to receive the daily top stories from the Financial Post, a division of Postmedia Network Inc.

Thanks for signing up!

A welcome email is on its way. If you don’t see it, please check your junk folder.

The next issue of Financial Post Top Stories will soon be in your inbox.

We encountered an issue signing you up. Please try again