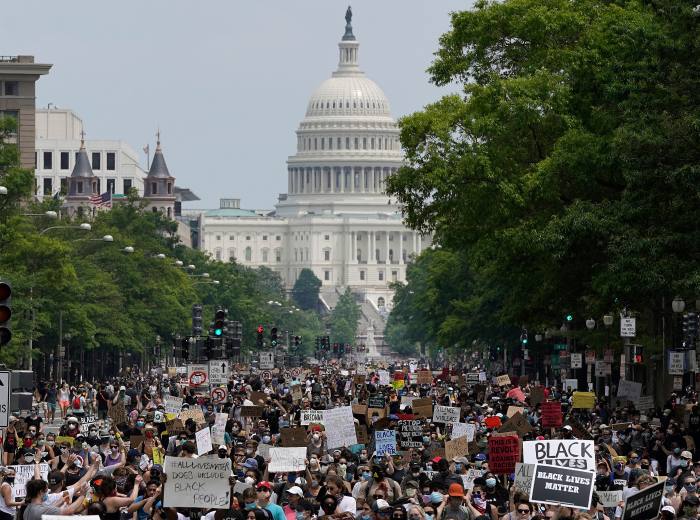 Shortly after Nicole Thorne Jenkins was announced as dean of Virginia’s McIntire School of Commerce in early May, protests erupted across the US over the police killing of George Floyd. As the Black Lives Matter movement spread, business schools around the world came under mounting pressure from students, staff and companies to deliver a more representative ethnic mix on campus.

Jenkins is determined to play her part. “This crisis is an opportunity [for business schools] to be truthful about our historical failings and put in place systems to address them robustly,” she says. On the University of Virginia school’s masters in management programme, 6 per cent of students are black, reflecting underrepresentation across business education.

Despite making up 13 per cent of the US workforce and 10.5 per cent of bachelors degree awards in the country, black Americans accounted for only 8.3 per cent of US citizens who took the Graduate Management Admission Test business school entrance exam last year. The proportion of black US citizens sitting the GMAT has been flat for a decade.

Jenkins says the imbalance is caused by the economic and educational disparities facing black Americans, which have created a gap in aspiration and achievement. She plans to work with high schools to increase awareness of business degrees. “Education is a transformational power, a great equaliser,” says the dean, whose parents attended segregated schools.

Insead, with campuses in France and Singapore, has pledged to increase the scholarship budget for students from under-represented backgrounds across all degree programmes. Race is often linked with wealth: for the past half-century the average black US household had less than one-tenth the average wealth of white families in real terms.

“Under-represented minorities very often don’t apply to business schools because they have to pay fees for an admissions exam, application fees with an uncertain outcome, then tuition fees,” says Insead’s dean Ilian Mihov, adding that the coronavirus pandemic may have compounded financial pressure on these groups.

Porai Gwendere, a low-income MiM student from Zimbabwe, says he would not have enrolled at London Business School this year were it not for a £33,600 scholarship, for example.

Chioma Isiadinso, chief executive of the New York admissions consultancy Expartus, says standardised testing is “a major barrier for people of colour”. The GMAT (costing $275 in the US) assesses a candidate’s readiness for academic rigour, but in 2019 the mean score of African Americans was 459, compared with 570 for white candidates.

Help us redesign our rankings

We are seeking help from prospective business students as we develop new digital tools and content to assist readers make the best educational choices.

If you are willing to take part in our research, please complete this survey, which should only take 10 minutes.

Isiadinso says economic factors explain the achievement gap, with wealthier students able to pay for private tutors. Stacey Koprince, content and curriculum lead at Manhattan Prep, which offers coaching for tests such as GMAT, admits that her sector compounds the problem, but the company offers scholarships that are oversubscribed. She adds that educational inequalities are a factor in the GMAT score disparities, which are reflected in SAT test results and high school grades in the US.

Some business schools are waiving the GMAT as an admissions requirement, partly to improve diversity. However, Sangeet Chowfla, chief executive of the Graduate Management Admission Council, which runs the test, says these schools may have to rely on more subjective measures such as interviews to assess candidates, and that these “have more inherent opportunity for bias”.

Arnold Longboy, executive director of recruitment and admissions at London Business School, is pushing for more diverse review panels to guard against unconscious bias. “We don’t want to put a black candidate in front of a white alumnus for an interview because [the latter] may subconsciously want to admit someone who is just like them,” he says.

With 1.6 per cent of his LBS class being black or of black mixed heritage, Porai Gwendere thinks improving inclusion on campus should be a priority. For instance, he was paired with two mentors who have similar backgrounds in the Africa Club, a student and alumni society. “I’m a first-generation student; I can’t rely on career advice from my family,” he says.

Jenny Rodriguez, senior lecturer in employment studies at the UK’s Alliance Manchester Business School, wants to “decolonise” curricula. One way is to sufficiently represent minority leaders in case studies, an important teaching method. In 2017, it was estimated that among 10,000 widely used Harvard Business School cases, fewer than 1 per cent had a black protagonist. (Harvard says it now features a more diverse range of protagonists in cases.)

“We need to audit what we teach because inequalities are embedded in the knowledge we impart,” says Rodriguez. She adds that this subtly conflates success in business with being white and may lower black students’ aspiration to apply for business school.

Another factor is the lack of black professors: in 2018-19, just 4 per cent of the faculty who were US citizens at 436 business schools surveyed by accreditation body AACSB International were also black. One cause is that the internal networks typically used for faculty recruitment often preclude a diverse pool of candidates, says Sharoni Little, senior diversity, equity and inclusion officer at the University of Southern California’s Marshall School of Business. Retention is also an issue, she adds. “Many black professors lack a viable support system, including mentorship, committee assignments, research funding and leadership opportunities.”

At Georgetown University’s McDonough School of Business, there are only three black professors. The proportion of black MiM students is 5 per cent, but this year the school launched Georgetown Reach, a free programme to raise awareness of business schools among ethnic minority teenagers. They will spend a week later this year in Washington DC learning how to prepare for university through seminars on topics such as financial aid and high school class selection. “We want to change the perception of business schools: we want to be the ideal home for underprivileged kids and their way out of disadvantage,” says Paul Almeida, dean at McDonough.

With so many related initiatives, Insead’s Prof Mihov believes this is a pivotal moment on a long road to enrolling a more representative student intake across business schools. “I hope in 20 years’ time we do not talk about race because diversity has become so ubiquitous that it is irrelevant,” he says.