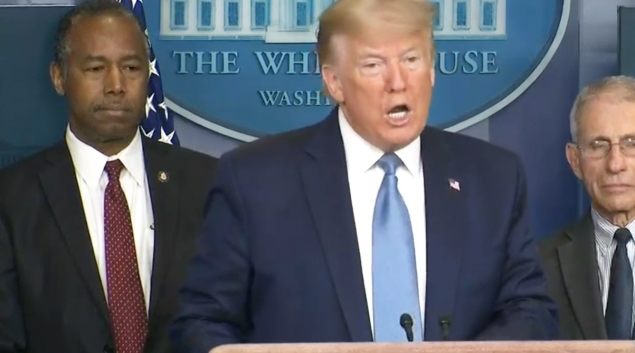 Hospitals are in need of an immediate influx of cash, not only to meet the surge of coronavirus cases, but to stay in business, according to the CEOs of hospitals in Washington State, Maine and New York.

Hospital executives are struggling to make payroll and therefore can’t afford to pay vendors for the personal protection equipment they need. As a result, many vendors are insisting on payment upon delivery before they will deliver supplies.

At least 83 deaths from COVID-19 have been reported in Washington State. The two hospitals headed by Graham are located about three hours from the epicenter in Seattle. They have not yet seen the surge experienced in Seattle, but the hospitals are already in a negative cash position, he said.

The system will have to think about closing in two weeks without an immediate influx of money to make payroll, he said during a conference call Saturday with the American Hospital Association and the CEOs of hospitals in Maine and New York.

On Thursday, the American Hospital Association, the American Medical Association and the American Nurses Association called on Congress to provide hospitals with $100 billion, with some of the money going into an emergency stabilization fund for expenses related to COVID-19 and to help them meet payroll. They had previously asked for $1 billion.

The AHA has given a series of ideas to Congress as to how the funds should be allocated and to waive the 2{f08ff3a0ad7db12f5b424ba38f473ff67b97b420df338baa81683bbacd458fca} sequester payment cut to Medicare. The association has also asked the Centers for Medicare and Medicaid Services for accelerated payments.

“The reality is we are in a war in which hospitals and health systems are on the front lines,” said Rick Pollack, AHA president and CEO.

Senators met through the weekend to hammer out a deal for a $1 trillion plus stimulus package to provide coronavirus preparedness and for economic relief in the form of $1,000 tax rebates for individuals, unemployment insurance and a payroll tax holiday for small businesses, according to The Hill.

“Our fear is this will only get worse,” said Kevin Donovan, CEO of a hospital system in the Lakes Region of New Hampshire. “We’ve had a number of positives in our community. We’re hoping the federal government and Congress will come to our aid. If not, we will not make payroll in a number of weeks.”

“If they wait until April to figure it out, our doors will be closed,” Graham said. “By the time surge hits us, we won’t be around.”

When President Trump declared the coronavirus a national emergency on March 13, he said the designation would free up billions as well as relax regulations hampering providers.

Regulations are being relaxed, with two states, Washington and Florida,  applying for and getting Section 1135 waivers for Medicaid that offer flexibilities such as waiving prior authorization requirements.

On March 18, Trump said he would invoke the Defense Production Act to make available N95 face masks and ventilators from national reserves.

Private companies are stepping up to make testing available and Hanes is among those ramping up production of face masks.

But so far, providers have seen very little in the way of funds or PPE.

Face masks are getting out there now as supply is being matched to demand, said Peter Gaynore, FEMA Administrator, during a White House press briefing on Saturday.

The Washington State health system is about to get $150,000 from the state  on Monday, an amount which gives the system an extra week of payroll, Graham said.

Without enough testing capacity, many providers are allowing for only hospitalized patients and staff to be tested.

Hospitals, at their own expense, are ramping up treatment and preparedness by erecting triage tents outside of emergency rooms, buying PPE when they can get it and in backfilling staff who are going out on furlough, are in self-isolation or who are having to care for children at home due to the schools closing.

While expenses are rising, revenue is taking a hit as states have either mandated the cancellation of elective surgeries or patients on their own are postponing the bread and butter services that keep many hospitals afloat.

Reimbursement for elective procedures far exceeds that of ER services.

LRGHealthcare, the two-hospital system in central New Hampshire, is taking a $50 million hit to its annual $210 million budget due to the lack of elective work, according to Donovan.

The system has four to five days cash on hand.

“When it’s a payroll week, we drop below that.” Donovan said. “We can’t borrow any more money.”

LaRay Brown, is president and CEO of One Brooklyn Health System in New York, which has three hospitals and three nursing homes serving about two million people. The safety net hospitals rely on support from New York State as an estimated 70{f08ff3a0ad7db12f5b424ba38f473ff67b97b420df338baa81683bbacd458fca} of the population has Medicaid for coverage and another 10 to 20{f08ff3a0ad7db12f5b424ba38f473ff67b97b420df338baa81683bbacd458fca} are on Medicare. Many others are uninsured, Brown said.

“We were already in a financial crisis before this health crisis,” Brown said. “We are facing a critical cash crisis. We had less than two weeks cash on hand before COVID-19.”

The system is putting up tents to do screening, pre testing and triage.
There are plans to increase bed capacity by 50{f08ff3a0ad7db12f5b424ba38f473ff67b97b420df338baa81683bbacd458fca} and increase the number of ventilators and other supplies.

“It’s gotten to be more of an existential crisis,” Brown said. “The reality is, we have to respond to the needs of patients.”

Over 31,000 people in the United States are infected with the coronavirus, but because of the lack of testing, the numbers could be much higher.

Without tests, providers have an inaccurate picture of the infection rate, Pollack said.
Of the 31,057 cases confirmed in the U.S., 390 people have died. Worldwide, over 329,000 cases have been confirmed, with over 14,000 deaths, according to Johns Hopkins.

“We’re clearly still in the early stages of this crisis,” AHA President and CEO Rick Pollack said. “We know no part of the country untouched. We also know hospitals and health systems are intensely focused on ramping up. And we know the financial pressures on hospitals by cutting elective procedures may mean many hospitals may not survive the strain.”