From the ollie on up: Hincks has made skateboarding his business 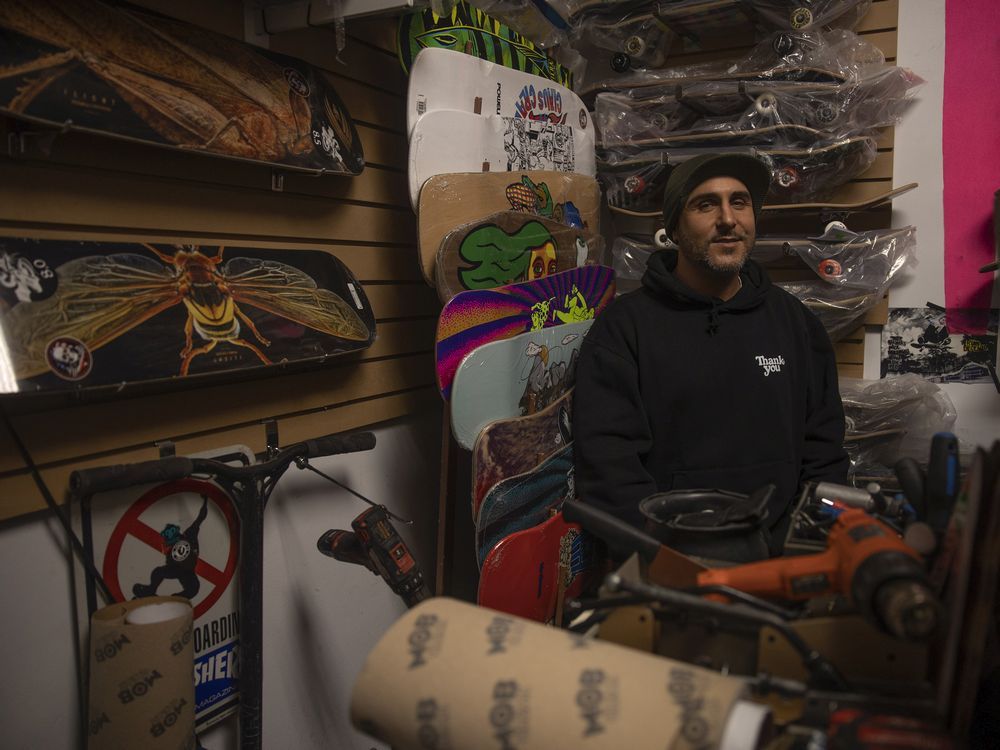 Andrew Hincks reckons it was sometime in the late ’80s when he got his first skateboard.

It was a garage sale special — five bucks. It turns out, that was a well-spent Laurier.

Decades later, he’s 40 years old. He owns a business in Regina and has an ownership stake in three more — one each in Kelowna, Saskatoon and Hamilton.

All of them peddle wares associated with his lifelong passion.

Although skateboarding is now an Olympic sport, there was a time when it was looked upon by many as nothing more than nuisance — a foolish hobby of delinquent youth.

But those transfixed by the poetry of wood and urethane, manipulated artfully by skilled feet, have always known it was more.

“I don’t know if it was an actual hate towards skateboarders,” Hincks said, recalling how he’d hear profanity hollered from car windows while engaged in parking lot skate sessions.

“It was just more of a jealousy that the world is kind of our playground and we don’t need to be told what to do and when to do it, as opposed to most other conventional sports.”

In the mid-’90s, the sport was still in its infancy in Saskatchewan. Skaters made their own way, as pioneers. And it was on a prairie frontier, more or less devoid of skateboard industry, that Hincks made his first foray into the business.

“I seen an ad in the back of a skateboard magazine offering a wholesale account,” Hincks recalled.

Understanding a thing or two about retail from family, a very young entrepreneur decided to sell some of his possessions at a garage sale to buy a “small stack of skateboards.”

He remembered his mom later helping him establish a business licence to “make it all legit,” so he could sell boards by “word of mouth” out of the basement.

That was the summer before he entered the eighth grade.

“It just kind of occurred to me that this could be a possible business endeavour, to supply Regina with proper skateboards and make sure that I always had fresh lumber as well,” he said.

This was before the internet. In fact, he conducted all of his business via fax machine at the time.

“The suppliers thought I was like a full-grown adult,” he said, laughing.

Since then, a lot of skaters have sourced boards from Hincks. But, at its current location on 9th Ave. North, his 306 SHOP offers more than just wares. Its indoor skatepark hosts riders of all skill levels, and even offers cameras that allow parents to tune in and make sure their kids are alright.

Hincks said that, over its years of operation, his park has routinely hosted a number of community organizations, offering youth from “all walks of life” a way of staying busy and active.

Even school gym classes will drop by once in a while.

Hincks was influenced as a youngster by his dad, Terry, a former city councillor who played for the Regina Rams in the early ’70s and later coached various youth sports, including football.

Andrew learned that giving back to the sport you love can also help hone your skills.

“I owe skateboarding my everything,” said Hincks, who hopes to pay it forward by helping a new generation of skaters as an instructor.

He grew up in a city where there weren’t many designated places to skate. As a city councillor, his father was instrumental in bringing purpose-built concrete to the Regina skateboard community.

After Terry died of cancer in 2016, it was decided that a Regina skatepark would be renamed in his honour.

When city council made the decision, former mayor Michael Fougere remembered Terry speaking “many, many times” about the importance of a place for skateboarders.

Hincks remembers his dad being supportive of him — not just in skateboarding, but in any endeavour he undertook.

“Giving back to our passions more than we take is something that he definitely coached me on,” Hincks said.

Since those early days, the evolution of the sport has been a full 180. “No pun intended,” he said.

As for where the sport is going …

“At this point, at this time of humanity, it’s kind of tough to tell,” Hincks said, adding that he’d like to see bigger and better infrastructure in Regina.

“That’s usually the bigger terrain the athletes use to practise in regards to going to the X Games or the Olympics, or just pushing it to the next level,” he said.

For Hincks personally, it’s about not leaving cards on the table. He wants to be sure when he looks back on things that there will be no “what ifs.”

“I want to create as much opportunity for myself, my family and my friends, and my employees, and my city, and my province, and my country, as possible.”

The news seems to be flying at us faster all the time. From COVID-19 updates to politics and crime and everything in between, it can be hard to keep up. With that in mind, the Regina Leader-Post has created an Afternoon Headlines newsletter that can be delivered daily to your inbox to help make sure you are up to date with the most vital news of the day. Click here to subscribe.

Sign up to receive daily headline news from Regina Leader-Post, a division of Postmedia Network Inc.

Thanks for signing up!

A welcome email is on its way. If you don’t see it, please check your junk folder.

The next issue of Regina Leader Post Headline News will soon be in your inbox.

We encountered an issue signing you up. Please try again