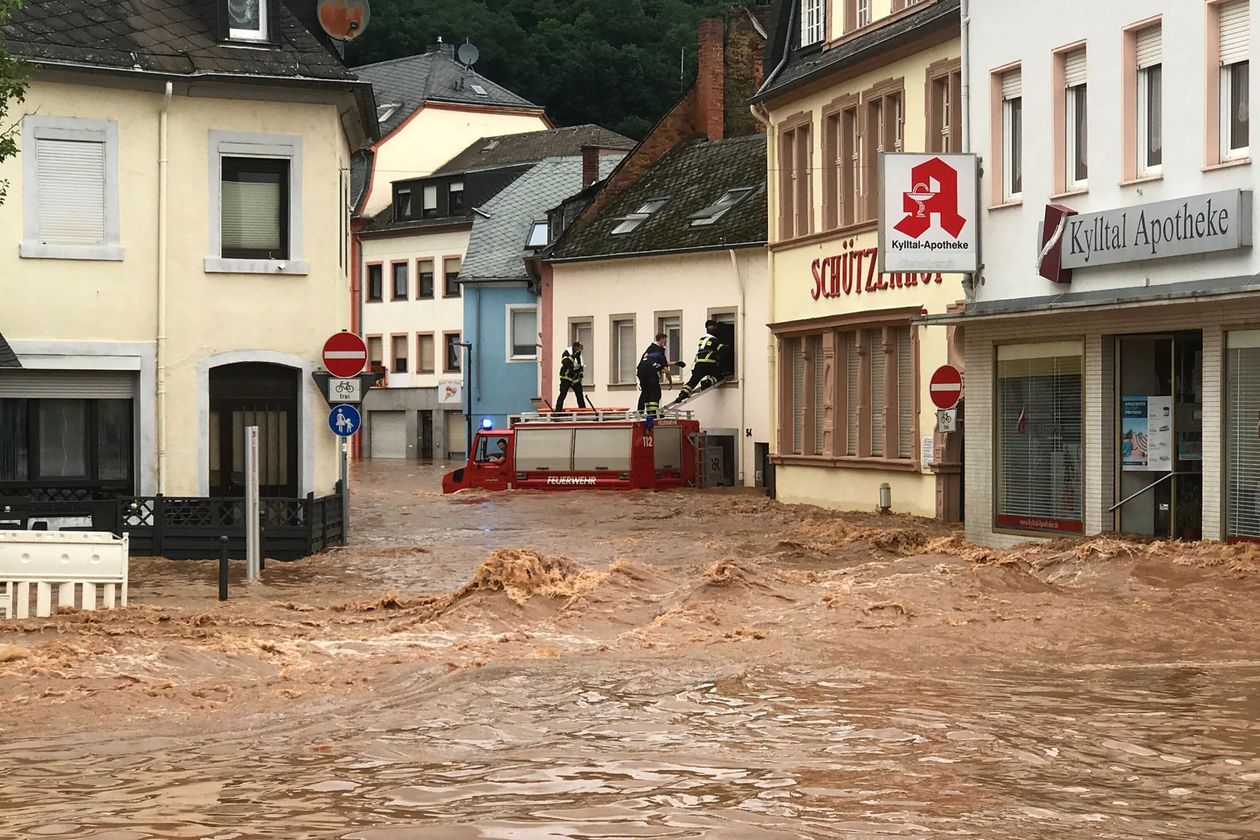 Dozens of people were feared dead and many more were missing as the worst flooding in decades caused houses to collapse in Germany, Belgium and other parts of western Europe following days of heavy rain that swelled rivers and overloaded sewage systems.

Over 40 people were reported dead and more than 50 were missing in western Germany, where nearly hundred of houses collapsed, six of them in the small village of Schuld.

People were left trapped in their homes across the region on Thursday, many of them waiting to be rescued on roofs as severe flooding turned streets into rivers, swept away cars and crushed houses. Hundreds of thousands of households were cut off from power and water supplies as well as telecommunications across the flooded area. In one town, the torrent ripped off a piece of the railway, officials said.

Two firefighters died while rescuing people encircled by the floods, according to authorities in the western state of North Rhine-Westphalia. The army was deployed to help rescue services to evacuate hospitals and homes with the help of helicopters and armored amphibious vehicles.

The rainfall in the region was subsiding on Thursday but infrastructure remained severely affected and authorities feared that more houses, weakened by the floods, could collapse. Dozens of citizens were seeking help from emergency departments, according to Philipp Heller, deputy chief of the fire department in the western town of Blankenheim.

“I am shaken by the catastrophe that has caused the suffering of so many people in the flooded areas. My condolences go to the relatives of the dead and missing. I thank from my heart the many tireless helpers and rescue services,” German Chancellor

said in a tweet released by her spokesman on Thursday.

Survivors told German television how the torrent took away all of their possessions and in some cases swept away their entire homes. Parts of the Rhine, a major European waterway that swelled over its banks, were closed for traffic.

Similar scenes were playing out in southern Belgium, where at least six people died and many were being evacuated in the worst-hit areas, such as the province of Liege after over a dozen houses collapsed, local authorities said. Liege authorities asked all nonresidents to evacuate the city, and residents to remain on the upper floors as the water was expected to climb to over 1½ meters. Trains and other services were halted as rescuers rushed to affected areas across the Wallonia region.

Across the border, authorities in the southern Dutch province of Limburg said hundreds of households would need to be evacuated. A bridge was swept away by the flood in the area.

In neighboring France, the national meteorological agency Thursday warned of possible flooding amid intense rainfalls in the northeast of the country along the German border, while noting that the rain was expected to subside over the course of the day as the cold, low-pressure weather system continued eastward and southward toward northern Italy.

“This spell of very bad weather is highly unusual in the middle of the meteorological summer,” French weather network La Chaîne Météo said, adding that it could bring record-breaking downpours in the east of the country.

The floods coincide with a bout of severe heat and drought in parts of the U.S. and Europe, and some scientists say there is evidence of extreme weather events becoming more frequent as climate change progresses.

While not all extreme weather events can be explained by climate change, many scientists have warned that global warming would lead to more unpredictable weather patterns and an increased occurrence of extreme events such as this year’s heat wave in the western U.S., according to Andreas Marx, a climate researcher with the Helmholtz-Center for Environmental Research in Germany.

Mr. Marx noted that Germany had experienced similar disasters in the past 15 years, and that it is difficult to establish a clear link between individual events and global climate change.

“But it is also true that such events are expected as the climate changes: a heated earth surface means more water in the atmosphere, and that can lead to severe rains and we are seeing this take place now,” Mr. Marx, who specializes in drought research, said.

There is clear evidence that extremely wet periods that regularly take place are getting wetter, while extremely dry periods are becoming drier due to climate change, he said.