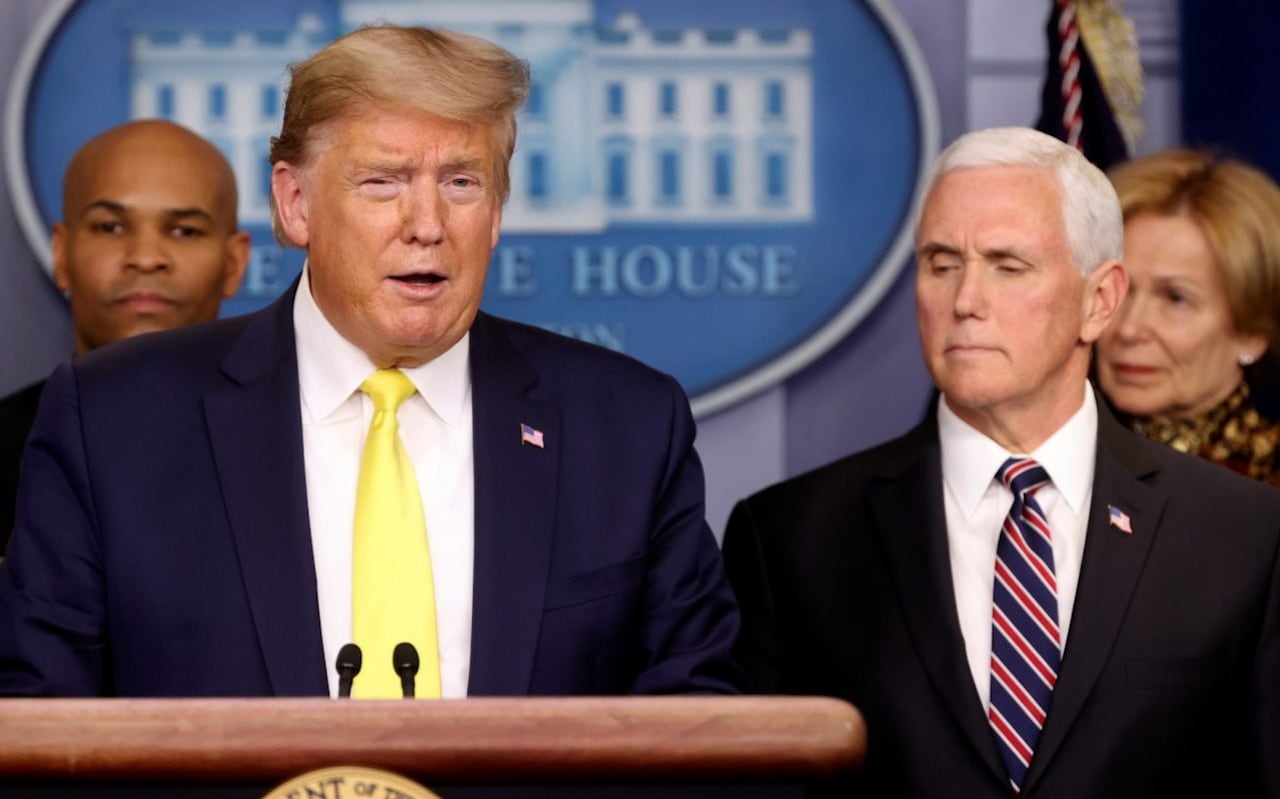 Donald Trump on Monday said he would  be taking “major” steps to gird the economy against the impact of the spreading coronavirus outbreak and will discuss a payroll tax cut with congressional Republicans on Tuesday.

He did not provide details but said a news conference will be held on Tuesday.

House of Representatives Speaker Nancy Pelosi and Senate Minority Leader Chuck Schumer, the top two Democrats in Congress, told reporters that any payroll tax cut should be limited to those affected by the virus.

They also said they are crafting new legislation, on the heels of $8.3 billion coronavirus funding enacted last week, that might be ready to be introduced this week.

Among proposals that could be included are ensuring water supplies are maintained for people even if they cannot pay their bills as a result of the crisis, expanded unemployment insurance, medical leave and providing food for children who rely on school nutrition programmes if schools are shut.

Vice President Mike Pence said the administration was consulting Congress on providing paid sick leave to workers, an idea that Democrats already have been trying to advance.

The stepped-up response to the coronavirus came as the number of confirmed cases in the United States hit 605, according to Johns Hopkins University. Three additional deaths in Washington state, according to officials, brought the total nationwide to 25.

The administration was planning to huddle in coming days with executives of the banking, hospital and health insurance industries.

While an across-the-board payroll tax cut has been under discussion, top White House economic adviser Larry Kudlow and others have advocated specific tax credits, loans or direct subsidies to certain industries or hard-hit areas.

A payroll tax cut could encourage consumer spending and help households that might otherwise struggle to make rent and mortgage payments on time or pay medical bills if family members’ work hours are reduced during the coronavirus outbreak.

In Florida, state health officials said everyone returning from China, Iran, South Korea and Italy must isolate for 14 days while travellers from other countries affected by the outbreak should monitor their health.

Thirty-four US states and the District of Columbia have reported to the US Centres for Disease Control and Prevention (CDC) infections of the respiratory illness COVID-19 that can lead to pneumonia. Louisiana had its first presumed coronavirus case, Governor John Bel Edwards announced on Monday.

Mr Trump, who often points to the stock market as a gauge of his economic record, criticised news media organisations’ coverage of the coronavirus outbreak and accused Democrats of hyping the situation “far beyond what the facts would warrant.”

Several US universities were either moving to virtual instruction or considering the step and limiting gatherings on their campuses.

As leaders in the US Congress reviewed potential plans for operating amid coronavirus, four Republican lawmakers – Senator Ted Cruz and Representatives Paul Gosar, Doug Collins and Matt Gaetz –announced that they would self-quarantine after coming in contact at a conservative political conference with an attendee who later tested positive for the virus.

Mr Gaetz travelled with Mr Trump aboard Air Force One on Monday.

Mr Trump and Mr Pence, who is heading the administration’s overall response to the crisis, also attended the conference. The White House said there was no indication either came into contact with the infected attendee.

The White House late on Monday said that Mr Trump had not received the coronavirus test. Mr Pence said he has not been tested.

In California, officials planned to offload 2,400 passengers on Monday and Tuesday from the Grand Princess cruise ship, which was barred from returning to San Francisco last week due to a coronavirus outbreak on board.

Most of the passengers will go into quarantine at military bases in the United States, with those requiring immediate medical attention heading to hospitals. The crew of 1,100 will be quarantined and treated aboard the ship, unless they are in need of acute care off the vessel.

California has more than 100 confirmed cases, while on the East Coast, cases in New York state rose to 142, up from 105 a day earlier, Governor Andrew Cuomo said.

New York City Mayor Bill de Blasio asked employers in the nation’s most populous city to consider staggering workers’ start times to ease crowding on public transport and to allow more telecommuting where possible. Mr De Blasio said there were 20 confirmed cases in the city as of Monday afternoon.