Cruise Passengers Quarantined on Board After Coronavirus Detected 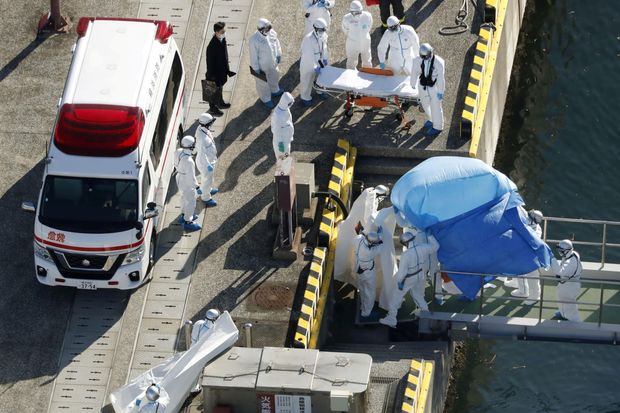 TOKYO—Japan said Wednesday that 10 people on a cruise ship with about 3,700 passengers and crew aboard tested positive for the novel coronavirus, and the health minister said everyone is likely to be kept on the ship for two weeks.

The Diamond Princess has been quarantined since Monday night in Yokohama, a port city just south of Tokyo, after an 80-year-old man from Hong Kong who had been on the ship tested positive for the virus. The man disembarked in Hong Kong and is no longer on the ship.

Tests for the virus were administered to 273 people on the ship who had symptoms such as fever or who had close contact with the infected man. Initial results for 31 people showed 10 of them had the virus, officials said. The 10 were brought to hospitals on shore with help from the Japanese coast guard.

Nine are passengers—two Australian, three Japanese, three from Hong Kong and one from the U.S.—and one is a Filipino crew member, ship operator Princess Cruises said in a statement.

Mr. Kato said that in principle everyone on the ship would be required to remain there for 14 days, starting Wednesday. He said he didn’t know when the remainder of the test results would be available.

Mr. Kato said the ship is planning to travel further away from the coast to dump sewage from tanks that are full. The trip is expected to take more than 10 hours, he said.

The passengers include people from Taiwan and Hong Kong, and about half are Japanese.

The cruise ship, which has a dance hall and swimming pool, left Yokohama on Jan. 20. The infected passenger got off on Jan. 25, before it was known he had the coronavirus. The ship then visited Vietnam, Taiwan and Okinawa before returning to Yokohama on Monday night.

A spokesman for Carnival Japan, the local coordinating company for the cruise, said the ship would be resupplied with food and other necessities at Yokohama port on Wednesday. It will also provide free Wi-Fi service and telephone lines.