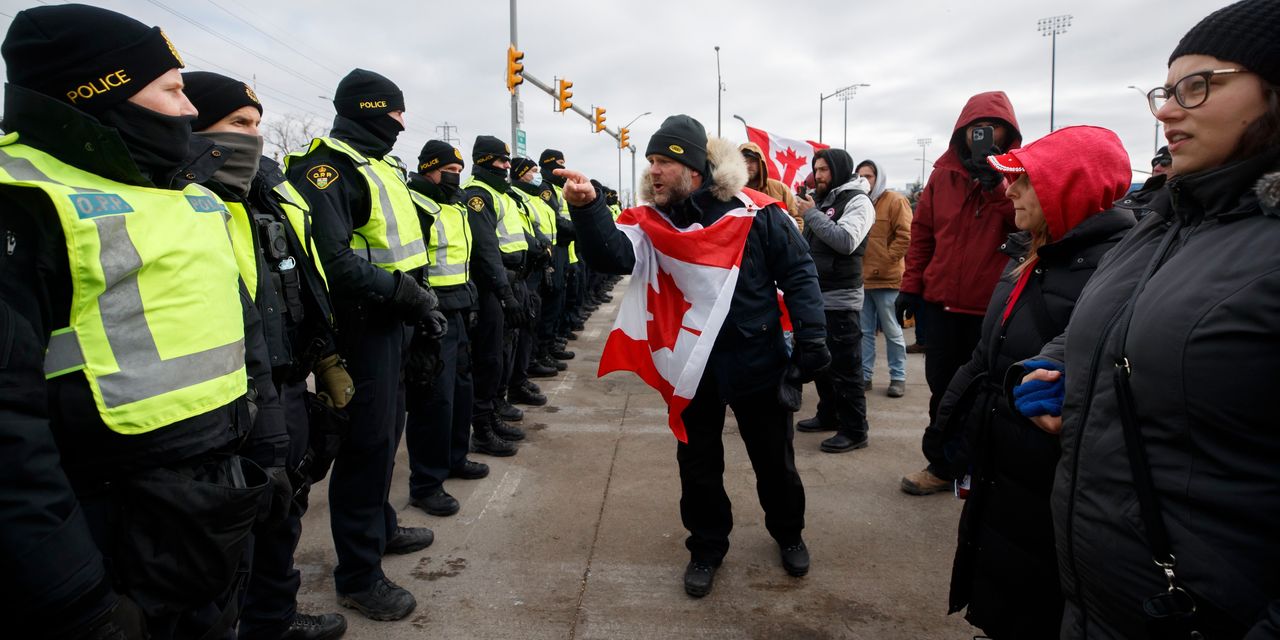 Efforts by Canadian police to clear protesters blocking traffic on a crucial bridge between the U.S. and Canada appear to have stalled Saturday, as an initial crowd of roughly 50 people swelled to over 500 as of early afternoon, among them parents with children.

A row of police officers, standing side-by-side across a six-lane road, succeeded in moving protesters away from the entrance to the Ambassador Bridge, which links Windsor, Ontario, to Detroit, opening some corridors toward the bridge. However, there was still no traffic either northbound or southbound on the bridge as of early afternoon.

The crowd was protesting Covid-19 vaccine mandates and other social restrictions.

Windsor Mayor Drew Dilkens said in a television interview with CTV network on Saturday afternoon that police expect to clear the protest this weekend and would do it peacefully, if possible.

“But at the end of the day, if folks are just absolutely unwilling to leave, police will have to do what is required to remove them so we can get this border crossing open,” he said.

Windsor Police Department said on Twitter that protesters who remained would be subject to arrest. “People are advised to immediately vacate the area.”

Police in France were also dealing with protests similar to those in Canada. In Paris, police on Saturday fired tear gas on the Champs Elysées and other sites across the country to disperse crowds who gathered to protest France’s Covid restrictions and vaccine requirements. Some protesters attempted to drive into the French capital in a “Freedom Convoy,” mirroring the protests in Canada. Police stopped most of those vehicles before they could enter central Paris.

In Windsor, some vehicles that were part of the bridge blockade departed early on Saturday once police arrived around 8:20 a.m. Some protesters started to take down tents that had served as makeshift kitchens.

Despite police efforts, other individuals joined the demonstrators.

When the police action began, officers walked in a line toward the protest group, forcing them to back further into Windsor. Some protesters waved Canadian flags, some sang the national anthem, “O Canada.” An armored police vehicle was on the scene, behind the officers. The movement stopped around noon, however, as police held their line against a growing crowd.

By late afternoon, the police department said on Twitter it was starting to ticket and tow vehicles parked in the area.

Business leaders, who had demanded that Canadian Prime Minister Justin Trudeau move to end the blockade, said they welcomed the move to reopen the bridge.

“We had all hoped those obstructing trade and travel would have left of their own accord after President Biden and Prime Minister Trudeau had made clear the blockade could not be allowed to continue, but some did not. Our laws must be enforced and our borders must be secured,” said

president of the Business Council of Canada, a group that represents chief executives at the country’s biggest companies.

A representative from Canada’s border agency provided no timeline as to when the Ambassador Bridge might reopen.

The bridge, one of the busiest border crossings in North America, accommodates roughly 30% of annual two-way U.S.-Canada trade, which recent U.S. data peg at more than $600 billion.

Over $28 billion of two-way trade in motor vehicles and auto parts was transported last year via the Ambassador Bridge, according to Statistics Canada.

Commercial trucks have been rerouted north to the Blue Water Bridge, which crosses the St. Clair River and connects Port Huron, Mich., with Sarnia, Ontario, roughly 66 miles north of the Detroit-Windsor crossing. Truckers have faced long delays in crossing the border.

“The same rule of law that guarantees the right to peaceful protest also underpins the principle of free trade and commerce,” said Flavio Volpe, president of the Automotive Parts Manufacturers’ Association. His group, along with the city of Windsor, made the joint bid to an Ontario court for an injunction. “I take no comfort in seeking a legal remedy to an illegal blockade, but I have a responsibility to honest Canadian enterprise that I take seriously.”

Mr. Trudeau said Friday that the border crossing “cannot and will not remain closed” and called on protesters to leave, saying they are taking the risk of getting a criminal record or having their drivers’ licenses revoked.

, have curtailed production this week and sent employees home in some cases because parts required for assembly couldn’t be delivered. Some Canadian auto-parts suppliers have also started to reduce production because they are unable to ship orders to the U.S.

“We welcome efforts by law enforcement to end the border blockades,” said Brian Kingston, president of the Canadian Vehicle Manufacturers’ Association, a lobby group that represents the Detroit-based auto makers in Canada. “The blockades continue to impact thousands of jobs on both sides of the border; cross-border trade must be restored as quickly as possible.”

—Matthew Dalton in Paris contributed to this article.