Budget and inflation take the spotlight in coming week, with Next PLC, Kingfisher PLC and Oxford Nanopore Technologies supporting 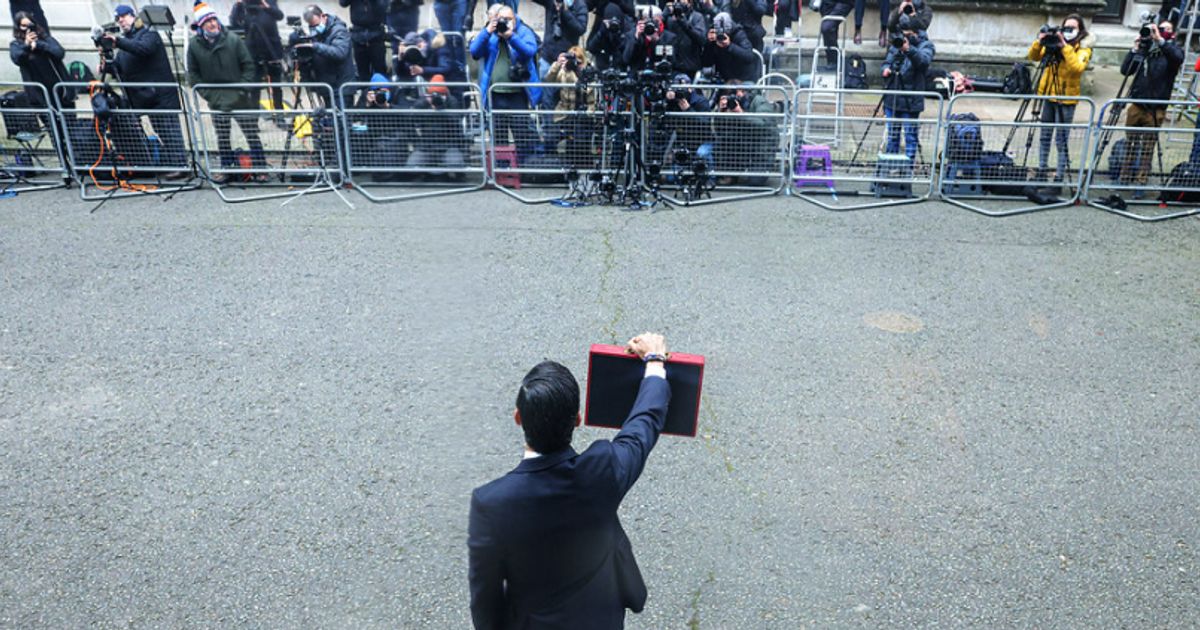 With Rishi Sunak’s Budget in the spotlight midweek, with inflation numbers likely to make for painful viewing, the coming week’s financial diary offers a range of items to watch for investors, including a diverse rack of retailers from the clothes and cars of Next to Pendragon, to the screws and wood-glues at Kingfisher and Wickes.

As well as inflation numbers on Wednesday the week starts with a house prices update from Rightmove, and there will be usual catching up on the weekend’s developments, which are certain to include geopolitics and a further round of rumours, speculation and leaks about the spring statement.

It was way back in November that we last heard from Kingfisher PLC, when the B&Q owner said full-year profits were nailed on at the higher end of its previous guidance, following strong sales in the third quarter.

Like-for-like sales were down by 2.4% on the same period last year, though this was compared to a period when demand soared amid the first Covid lockdowns.

For the full year, analysts are forecasting a 3.4% like-for-like decline in sales and £769mln of underlying profit before tax, which would be a 20% drop on the prior year.

“The key question form investors is the outlook – consensus is currently forecasting £772mln in PBT for next year (£760mln UBSe), but investors seem increasingly bearish on KGF’s ability to deliver a strong performance against a backdrop of consumers rotating away from home spend, on top of a weak macro backdrop,” said UBS.

Trustpilot Group PLC’s revenue growth got only a 3-star rating during the pandemic, slowing on a constant currency basis from 32% in 2019 to 23%.

But growth has accelerated since, with the FTSE 250-listed group’s year-end update indicating that 2021 revenues will be US$131m, up 24% on a constant rate or 29% in total, with both bookings and annual recurring revenue, which are indications of future growth, had improved to 26-27%.

This implies Trustpilot is recovering closer to the historical norms of 30%, said broker Peel Hunt, which will be looking at key performance indicators during Tuesday’s results, such as retention rate, numbers of reviews and active domains.

Along with their early-stage life-science peers, Oxford Nanopore Technology PLC’s shares have had a weak start to 2022, but the company’s full-year results on Tuesday could provide a boost.

Analysts at Berenberg said guidance for 2022 and profit margin progress should be the focus after the company’s sales update in January guided to increased total Life Science Research Tools (LSRT) revenues of more than £120mln for 2021, but with targets for 2022 LSRT sales kept at £135-145mln.

With renewed interest in pandemic-surveillance sequencing and progress in several large-scale projects, “we think there is upward pressure versus the communicated figures and consensus”, the analysts said, adding that a planned technology update on the day “could also move the shares”.

“In addition, we think the shares would be helped by any upcoming launches indicating that Oxford Nanopore is approaching its clinical opportunities within cancer diagnostics, infectious disease or microbiology faster than expected.”

Wednesday will be Budget day in England, or the spring statement as the Chancellor calls it, where Rishi Sunak’s House of Commons speech will be accompanied by new forecasts from the Office for Budget Responsibility on the economy and public finances.

Sunak has been left with challenging decisions ahead of the Spring Statement, with recent events, for example, potentially overriding previous plans to lift National Insurance.

On the plus side, the Treasury is expected to gain an extra £12.5bn from personal tax as soaring inflation doubles the effect of planned income tax freezes, according to one independent forecast.

For some of the expected tax hikes and giveaways, read the round-up of Budget previews here.

Almost a week after the Bank of England raised rates to 0.75% the latest inflation numbers are unlikely to offer much encouragement that we won’t see further rises in the cost of living in the coming months.

The Bank of England said “inflation is expected to increase further in coming months, to around 8% in 2022 Q2, and perhaps even higher later this year,” mostly due to higher energy prices.

“Slightly more worrying, for those looking for signs of a top in price pressures,” said Michael Hewson at CMC Markets, “there was little sign of a slowdown in the more forward-looking PPI numbers which continued to rise as output prices came in at their highest levels since 2008 at 9.9%, although input prices slowed to 13.6%, from 13.8%.”

In company news, followers of funeral services group Dignity PLC (LSE:DTY) were already reeling before the Ukraine war after the company stated said future covenants could be breached, requiring a new injection of cash, while a predicted normalising of the death rate should make 2022 tougher too.

The covenant terms mean that the company sees EBITDA as potentially below £52mln over a 12-month period, which compares to consensus forecast of £74.5mln for last year.

On the ahead, broker Peel Hunt said: “There have been circa 120,000 excess deaths compared to expectations over the last two years. Given that the average age of those excess deaths is over 80, this means that deaths are likely to be markedly lower over the next few years.

“Assuming the excess is ‘recovered’ over a four-year period would imply annual deaths of 570,000, which would be a reduction of 14% on last year. This would result in a challenging environment for Dignity (and the industry), particularly given pressure on pricing, as well as rising costs of labour and energy.

Elsewhere, with second-hand car prices motoring as chip shortages restrict the supply of new models, the point is likely to be made again when Pendragon Group, one of London’s listed car dealers, reports on Wednesday.

In December, it upped its forecast for profits in 2021 to £80mln from £70mln primarily due to the new car shortage issue.

How the three UK interest rate hikes subsequently have affected the mood of the car buying public and if it is turning more cautious as the squeeze on household incomes tightens will be the thing to note.

Next PLC is set to release its full-year preliminary results on Thursday, with the clothing retailer having upped its full-year guidance in January.

Profit before tax guidance was raised by £22mln to £822mln for the year to end January, with long-time investors likely to be confident the company will be able to reach or beat that guidance, based on its previous skills in setting guidance at beatable levels.

The key for the results will be any change in guidance from boss Simon Wolfson, Baron of Aspley Guise, for the current year, having initially steered towards 7% full-price sale growth and a 5% increase in pre-tax profits to £860mln.

Comments from the Baron on input cost inflation and pricing will also be closely watched, with Next having flagged a 5.4% increase in its wage bill for the year just ended, balanced by 3.7% price increases for the spring/summer collection last year and 6% for autumn/winter.

READ: Will Next’s inflation and dividend guidance come in a smaller or larger size?

Also on Thursday investors will be looking for increased assets under management and profit when private equity firm Bridgepoint Group Plc reports its first annual results since its initial public offer last July.

Bridgepoint has seen its shares come under pressure, down 40% this year in the recent market turmoil, with the stock languishing below July’s 350p IPO price.

Peel Hunt, which has a ‘buy’ recommendation, thinks earnings upgrades are likely to be needed for the stock to rebound above the listing price. But that’s unlikely for now, it said in a note on Friday.

A trading update covering the six months to the end of January from Smiths Group PLC will be the first since the company completed the sale of Smiths Medical to ICU Medical.

In November, the group said the first quarter of its current fiscal year had been in line with its expectations, with revenue from continuing operations up 1% year-on-year underlying basis.

Investors will be looking to see how much progress the group has made towards returning to pre-Covid top-line growth of around 3%.

United Utilities Group PLC is set to issue a trading update ahead of the release of its full-year results in May and the excitement is also up to 1 on the Thrillometer.

In addition to the usual stuff about leakage levels there could be an increased focus on the group’s affordability schemes, given that the poorer parts of society are feeling the squeeze and are set to be squeezed more over the next few months.

In November, the water group said annual revenues would rise this year by 2% (from £1.8bn), with costs higher and its finance charge rising due to its index-linked debt.

Since then, though, the whole industry has faced more angry criticism for the amount of sewage and other waste being pumped into the UK’s waterways.

Regulator Ofwat is in the middle of a sector-wide investigation with all water groups including UU asked to supply performance data.

Wickes Group PLC said earlier this month that its results would be held up for a week as a result of a delay in the auditing process.

The company expects adjusted PBT to be no less than £83mln, with a prior announcement indicating like-for-like sales growth of 13.3%.

“The finals are likely to focus on the sustainability of the current levels of demand in the core business, the group’s ability to pass through price inflation, and the state of the {Do It For Me] DIFM order book,” said broker Peel Hunt.

“We should also get an update on the group’s capital allocation policy, though this may be less detailed than we had previously anticipated given the change in CFO.”

In macroeconomic news, UK consumer spending saw a strong rebound in January, after the -0.4% slowdown seen in December. Not only did fuel sales recover, but we also saw a strong rebound in household goods and furniture, with high street sales showing a decent pickup, as 2022 got off to a decent start with a 1.9% rise. The numbers also show that while demand appears to have picked up, the retail sector still has to confront significant challenges in the months ahead as prices rise, and disposable income starts to reduce. This squeeze hasn’t as yet shown up in the latest BRC retail sales numbers, which showed that total sales rose by 6.7% in February, as the complete removal of Plan B restrictions at the end of January buoyed spending. Like for like sales showed a rise of 2.7% from this time last year, although it should be remembered the UK was one month into its third Covid lockdown. Sales of clothing and footwear saw a decent increase in February, while food sales slowed with the latest data from Barclaycard showing spent 13.7% more in February this year than they did in February 2020. Expectations are for February retail sales to rise by 0.8%.