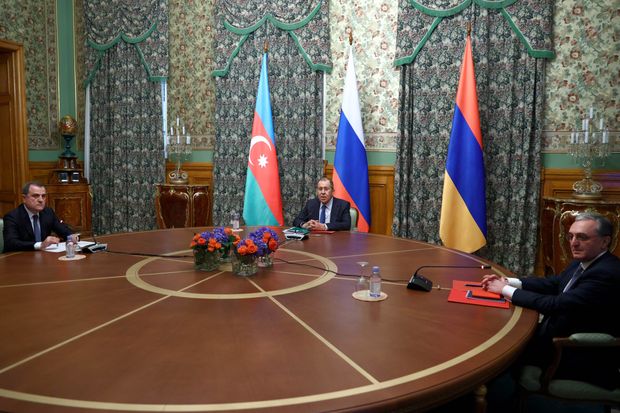 MOSCOW—Armenia and Azerbaijan announced a cease-fire after nearly two weeks of intense fighting that has claimed hundreds of lives following Russia-brokered talks over the disputed enclave of Nagorno-Karabakh.

The foreign ministers of the two warring countries said in a statement early Saturday that the truce, which began at noon local time, is intended to provide space to exchange prisoners and recover the dead. The announcement followed more than 10 hours of negotiations in Moscow mediated by Russian Foreign Minister Sergei Lavrov, who said that specific details will be agreed on later as talks continue.

Azerbaijan and Armenia “are starting substantive negotiations with the aim of achieving a peaceful settlement as soon as possible,” Mr. Lavrov said, adding that the talks would be mediated by Russia, the U.S. and France.

Underscoring the precariousness of any truce in the volatile region, both sides accused each other of violating the cease-fire shortly after it took effect. Armenia said Azeri units launched an assault five minutes after 12 p.m. Azerbaijan, meanwhile, said that Armenian armed forces were firing on Azeri regions.

Roughly the size of Delaware, the territory of Nagorno-Karabakh—a disputed enclave controlled by ethnic Armenians but internationally recognized as a part of Azerbaijan—has been a flashpoint between the two countries since the years following the collapse of the Soviet Union. The fighting flared up last month after nearly three decades of on-again, off-again skirmishes. A six-year war that ended in a 1994 cease-fire claimed some 30,000 lives.

Both sides have blamed each other for triggering the current outbreak of hostilities on Sept. 27. Armenia said Friday that 376 of its soldiers had been killed in the fighting so far, while Azerbaijan hasn’t disclosed how many of its troops have been killed.

Authorities in Nagorno-Karabakh said the conflict so far has cost at least 22 lives and injured more than 80 people. Azerbaijan said 31 Azeri civilians have been killed and 168 have been injured.

On Saturday, Azerbaijan President Ilham Aliyev said that the military part of the conflict has ended. But in a sign that the peace negotiations will be challenging, he said that Armenia must agree that the territory belongs to Azerbaijan.

“Now we have reached a political settlement that will ensure that we reach the end and get what rightfully belongs to us,” he told Russian media outlet RBC.

For Russia, which has close ties with both Armenia and Azerbaijan and regards the former Soviet republics as part of its sphere of influence, a successful cease-fire would amount to a diplomatic feat and help solidify its role as a mediator in the region. It comes as a series of crises in Russia’s backyard, from Belarus in the west to Kyrgyzstan in the east, are upending the Kremlin’s plans for deeper economic and defense ties with the former Soviet republics.

The Kremlin has long worked to keep Armenia and Azerbaijan bound tightly to Moscow due to their strategic location along an important energy corridor coveted by the West. The truce announced Saturday follows phone calls this week between Russian President Vladimir Putin and the Armenian and Azeri leaders, after which the Kremlin leader called for halting the hostilities on humanitarian grounds.

Underscoring Moscow’s desire to take the leading role in mediating the conflict, Mr. Putin on Saturday discussed the cease-fire with President Hassan Rouhani of Iran, another regional power, which has relations with both Yerevan and Baku.

The truce also comes after officials from the U.S., France and Russia, which have led mediation for almost three decades as co-chairs of the Organization for Security and Cooperation in Europe’s Minsk Group, have begun a concerted effort to reach a solution.

France on Saturday welcomed the cease-fire, but said it now had to be fully implemented.

“It must now be implemented and strictly observed in order to create the conditions for a permanent cessation of hostilities between the two countries,” the French foreign ministry said in a statement.

During the current flare-up in fighting, Turkey also intervened, throwing its support behind Azerbaijan, with which it shares ethnic and cultural ties. Turkey is already involved in two proxy conflicts with Russia—in Libya, where it is supporting the internationally recognized government against rebels backed by Russia, Egypt and the United Arab Emirates, and in Syria, where Moscow is a staunch ally of President Bashar al-Assad.

The Turkish government didn’t immediately comment on the cease-fire announcement. Earlier this week, Turkish Foreign Minister Mevlut Cavusoglu said a truce wouldn’t be enough to resolve the conflict because it would leave Armenia in control of parts of Azerbaijan’s territory.

“A cease-fire can take place, but what will be the result?” Mr. Cavusoglu said during a visit to Azerbaijan on Tuesday. “Can you tell Armenia to immediately withdraw from Azeri land?”

Since the conflict restarted, each side has accused the other of indiscriminate shelling of civilians and civilian infrastructure, including hospitals and schools, on both sides of the contact line that separates Armenian and Azeri forces. Roads, electricity and gas and communication networks have also been damaged across the region, officials from both countries say, though each denies targeting civilians.