A Delhi Police head constable was killed when protests against the controversial Citizenship Act turned violent on Monday. Ratan Lal was attached to the office of the Assistant Commissioner of Police, Gokulpuri, an official told PTI.


Several police personnel including Deputy Commissioner of Police, Shahdara, Amit Sharma were injured during clashes. According to the official, Sharma suffered injuries to his head and hand


Several vehicles, shops and houses were torched on Monday, a day after clashes broke out between those against and for the Citizenship (Amendment) Act.


Delhi Chief Minister Arvind Kejriwal on Monday urged Lt Governor Anil Baijal and Union Home Minister Amit Shah to restore law and order in the wake of violence in parts of northeast Delhi during protests for and against the new citizenship law.


“Very distressing news regarding disturbance of peace and harmony in parts of Delhi coming in. “I sincerely urge Hon’ble LG n Hon’ble Union Home Minister to restore law and order n ensure that peace and harmony is maintained. Nobody should be allowed to orchestrate flagrations (sic),” he tweeted. 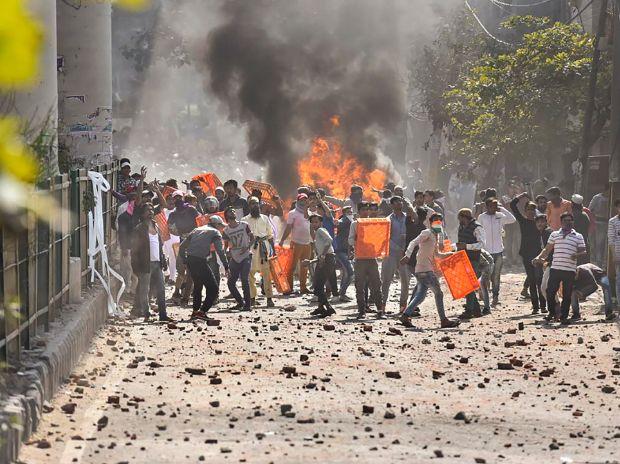 Protestors hurl brick-bats during clashes between a group of anti-CAA protestors and supporters of the new citizenship act. PTI


Meanwhile, the LG instructed the police commissioner to maintain law and order in the national capital ahead of UUS President Donald Trump’s arrival in the city. “Instructed @DelhiPolice and @CPDelhi to ensure that law and order is maintained in North East Delhi. The situation is being closely monitored. I urge everyone to exercise restraint for maintenance of peace and harmony,” Baijal tweeted.


Police fired tear gas shells and also resorted to mild lathicharge to disperse the protesters. A few policemen also attempted to pacify the groups. The Delhi Metro also closed entry and exit at Jaffrabad and Maujpur-Babarpur stations as an uneasy calm prevailed in the area. “Entry & exit of Jaffrabad and Maujpur-Babarpur are closed. Trains will not be halting at these stations,” DMRC tweeted. 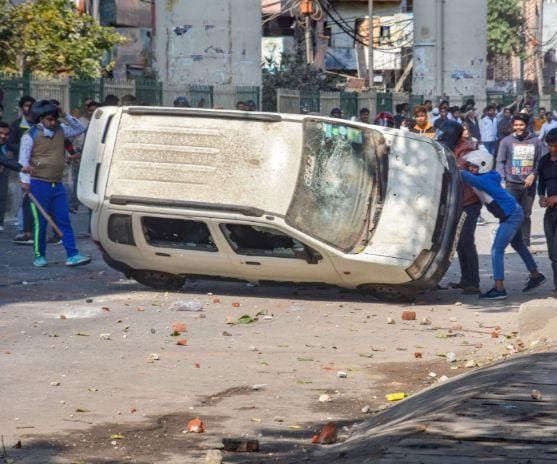 Protestors vandalize a car during a clash between a group of anti-Citizenship Amendment Act protestors and supporters of the new citizenship act, at Maujpur crossing. PTI


The entry and exit of Jaffrabad metro station were closed for over 24 hours.


Tension simmered in the area after hundreds of anti-CAA protesters, mostly women, blocked a road near the Jaffrabad metro station which connects Seelampur with Maujpur and Yamuna Vihar on Sunday. The women, carrying the tricolour and raising slogans of ‘aazadi’, said they would not move from the site till the Centre revokes the CAA.